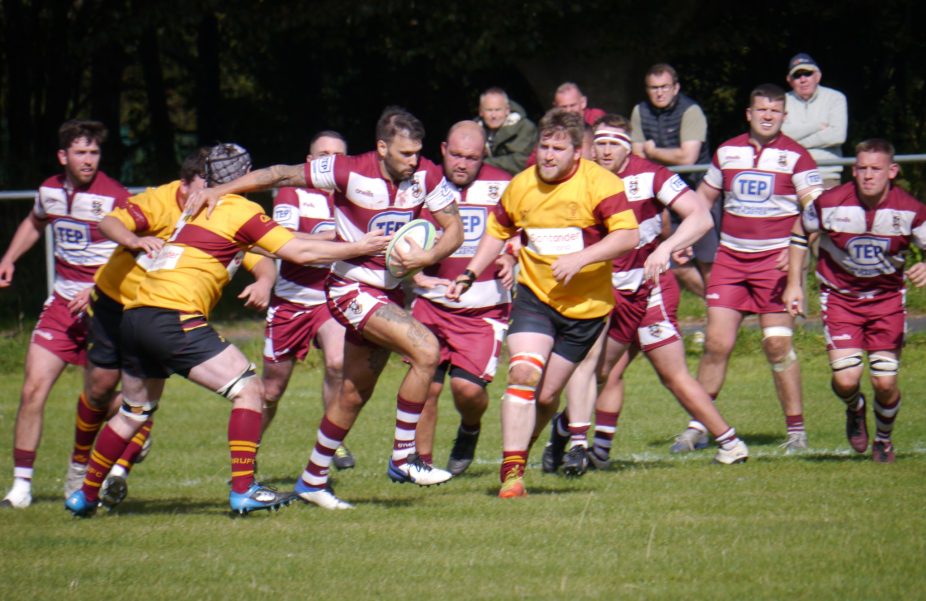 After suffering a close defeat at Broughton Park last week Rochdale looked for a good response against their Manx visitors, missing captain Dom Serridge with a broken foot and a couple of late cry offs Dale looked to Moore and Howard and Bentham to come in to strengthen the backs. A minutes silence was observed in memory of Her Majesty by all present. The visitors were soon on the attack and causing Dale trouble with fast passing moves and using the boot of their experienced fly half Guy Wood to gain territorial advantage, the first try came after 8 minutes as Douglas scored under the posts 7-0. After the visitors were penalized a line out on their 22 was well taken by Eddie Shanks and fed out to Keelan Bradley who crossed the line and then converted his own try 7-7 with 15 minutes gone.

Next a bizarre moment as the linesman an I.O.M. player waves for a forward pass close to touch on the 22. The referee rightly overrides him and gives a scrum to Dale, a good looking passing move was ended by a crunching tackle the ball was lost and the visitors took full advantage to score a good try 12-7. With 30 minutes gone the Douglas backs began to dominate and soon increased their lead to 19-7 with a converted try under the posts. A chance to get back in the game went begging when it was decided to take 3 points but the kick by the normally reliable Bradley went wide and half time saw Dale trailing 19-7.

The half time talk clearly had an impact as Dale moved the ball from midfield and with Danny Joesbury and Bradley linking to let in Simon Moore to score his first try the conversion going just wide 12-19.The new confidence was shown when Shanks took the ball from the back of the scrum and broke down the left flank only to be stopped short Douglas gave away a penalty on half way Bradley went for the posts and slotted an excellent kick taking the score to 15-19. Some desperate defence was needed by Dale to keep the visitors at bay , a tap and go free kick by Joesbury led to a crash over try by wing forward Harry Hayes 20-19 and the home side have their noses in front, the pack have done wonders but now was time for some changes as stalwart prop Tom Callaghan and hooker Jonny Bradley come off as Kyle Parry and Andy Foster replace them.

Dale were now back on the attack and a fine passing move saw Moore take his 2nd try converted by Bradley 27-19. Douglas keep pressing and only solid defence keep them at bay a penalty in front of the posts is squandered by Wood and Dale are soon on the attack the pack dominating the tiring visitors and the final try goes to birthday boy Tom Hindle crashing over for a converted score 34-19. A really good 2nd half performance maximum points if a somewhat flattering score line. Waterloo next week so another stern test on the cards.
David Rhodes R.R.U.F.C.