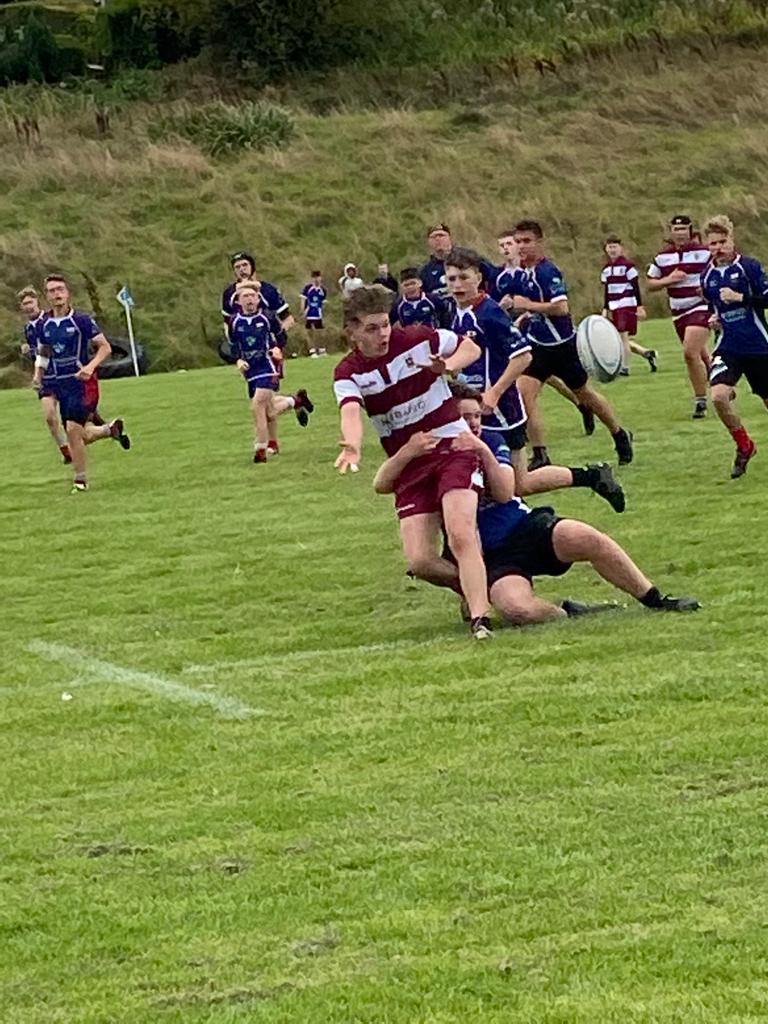 In the first Cup game of the new season, we met at Blackburn under pleasant weather conditions, the usual “wind tunnel” uncharacteristically less blowy than normal! After a respectfully observed one minute silence to remember the passing of the Queen, play got underway and despite appearing to be fired up and ready, the team spent the first 7 minutes finding their heads and feet as Blackburn piled on the pressure. Thumping tackles from Oli Husband and Hari G amongst others kept us in the game.

Fortunately, having weathered the storm without loss of points we got into gear. A great counter-ruck from around the halfway line, and Dan pinged the ball down the line to find Cameron having looped back to break through the Blackburn backs. Charlie sat on his shoulder and received the offload to finish the remaining yards and score our opener, which with the conversion from Adam saw us lead 7-0.

From the restart our play intensified. With Jethro taking the ball in the air, he charged into their pack, and Max Evans, Damian and Jonty created a platform for Josh to break round the side and charge to the line. A tackle that looked on the high side meant the referee disallowed his try for being held up, but from the restart in play, Josh made swift amends crossing the line less than 2 minutes later to claim the points he had thought were his earlier!

Again from the restart, solid forwards play and out the back of the scrum the ball came down the line. Hard straight running through Charlie and Ben Leaver to release Ethan who pinned his ears back and made it comfortably to the line to register his first score of the day, duly converted again by Adam – 19-0. The pattern continued .. kick off. Blackburn chased hard and tried to force their way through our back line. Cameron was immense securing yet another jackal and wrested the ball back. Swift delivery through Dan, Adam and this time a strong run by Charlie to the halfway who offloaded to Ben Leaver – from there he comfortably broke through 2 tackles and steamrollered over to bring the score to 24-0.

The final play of the half and this time Jethro received the ball from the kick-off, a powerful drive in the middle of the pitch and 3 of the Blackburn players were sucked in to slow him down. With the subsequent space created and still driving forward, Ethan was the grateful recipient and made no mistake to race once again down the field and score his 2nd of the day. The half concluded 29-0.

In Cup games the margin of difference cannot exceed 40 points, so we started the 2nd 30 minutes knowing we had to register a further 11 points without reply to secure the victory. Blackburn had different ideas and launched a furious assault which saw us pinned within our 5 metre channel, holding the ball up once over the line and tackling like demons to stop the onslaught. Our defence held firm and a knock on from Blackburn meant we secured a scrum. The ball flew downfield courtesy of Beavan and Leaver, and Isaac was on hand to take the ball down the final third of the pitch and offload to Will who was running a superb supporting line to cross the line. 34-0.

There then followed probably one the best team handling tries with a delightful interplay of passes from the initial break by James Richardson, and then 3 sublime passes from Charlie, to ben Leaver, back to Charlie and over the line. 39-0. Minutes later a deserved bruising forwards move saw Josh Jakeman claim the winning margin points and Adam made no mistake with the conversion to see the Cup game conclude 46-0.

At that point the game turned into a training development exercise, but with Blackburn players demotivated it was no surprise that Max Rawlinson used his Jedi mind powers to stop a tackle using his force of will alone (!) and ran a lovely line through his support and touch down to claim some points of his own. Beavan followed with the last play of the game to effectively cut out his entire back line and loop round to score with a final flourish and wrap up an exceptionally good morning.

All in all, a sublime team effort with Men of the Match plaudits going to Ethan and Jethro, although the whole team had delivered the result. The score-line doesn’t reflect the efforts and skill-set Blackburn put in and they are a team we should not underestimate in future encounters. The unbeaten season continues!