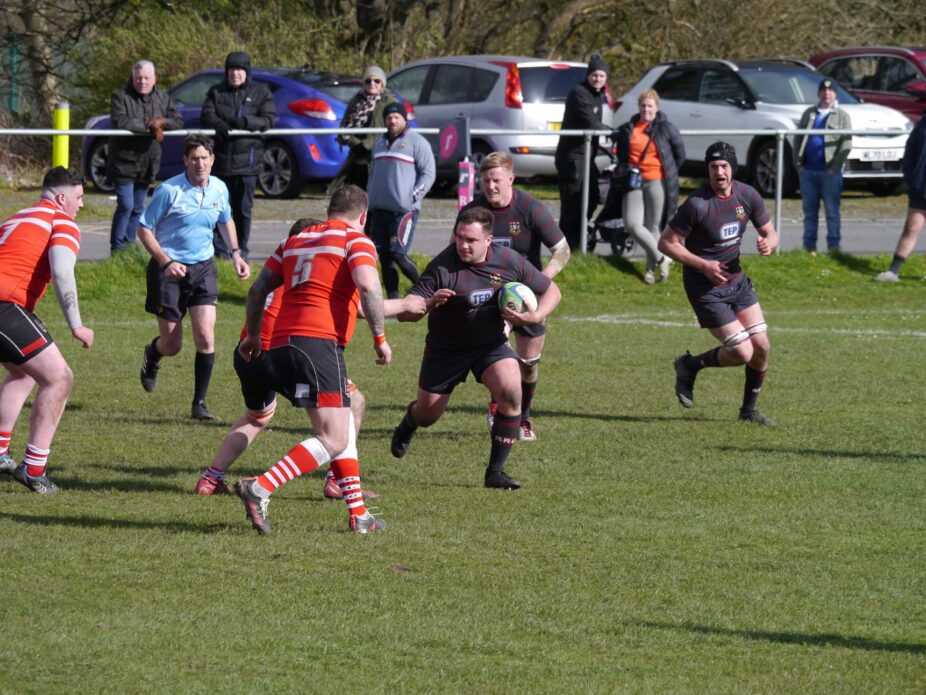 With several regulars unavailable coach Danny Collins called in 2nd row Jed Woolfenden and centre Ross Hartley to fill the gaps and provide some experience to a young side full of talent in the backs. The pitch had been cut short and looked immaculate set for some running rugby. However things rarely go to plan and it was Bolton who scored first after a high kick off with the sun behind them which the Dale pack failed to collect the visitors put together a nice passing move for the winger to score in the corner 5-0.
Dale managed to take the re-start and made good yards until stopped on the Bolton 22 an injury to a Bolton player halted play, when it restarted the ball was moved to the left wing by Danny Joesbury and good handling saw the Rochdale pack carry the ball forward and Tom Hindle go over the conversion attempt by Keelan Bradley hit the upright so 5-5 was the score with 15 minutes gone.

Bolton came forward again but a long pass in the midfield was intercepted by Jack Green who made good ground several ambitious passes by Bradley and Joesbury failed to find a gap in the visitors defence. Dale reached the line but were penalized for holding on, the Bolton penalty kick failed to make touch and the Dale forwards made good progress a final pass found Jake Castree bursting through to score Bradley made no mistake with the extras 12-5.

From the restart Dale forwards won good ball in the air with Jed Woolfenden and Chris Hodgkinson dominating the line outs. It was from a line out on the visitors 22 that the ball came across from Bradley to Ross Hartley and a long pass found Ieuan Bissell flying in on the wing he was stopped just short of the line. Minutes later after winning a scrum in the 5 metre area a short pass found Bissell hovering at centre and he broke through for a great individual try under the posts the conversion left the score 19-5.

Bolton were not giving up and a high kick was taken well by Bradley and returned with interest to the Bolton 22. A few long passes from both sides failed to find their targets and a series of free kicks found Dale camped on the visitors 5 metre line, a line out was taken by Hodgkinson and when the ball was passed to Brad Fox he crashed over from close range the try was converted by Bradley to leave the half time score 26-5.

The 2nd half was all action high kicks into a swirling wind full back Blair Henry did well when catching on his own 22 and making a good run to half way. Bolton had a scrum on the Dale 22 but good defence by the Dale wing forwards saw the ball come loose and Jack Green made good progress to the visitors 22 were he passed to Bissell who totally out paced the Bolton winger and full back to score another great try. A good long range conversion by Keelan Bradley made the score 33-5. The icing on the cake came on the hour as Bissell took a catch from a high box kick drew in the defence and then chipped over the despairing full back to score his 3rd and Rochdale’s 5th try under the posts the conversion left the score 40-5. Bolton carried on battling and after a high kick and chase the ball was passed out the winger who found a gap in the Dale defence to score in the corner.40-10.

From a charged down kick on their own 22 Bolton put together another good passing move to see their ever present centre round the Dale defenders and go in by the posts an easy conversion saw the score at 40-17.

Coach Collins brought on Harry Hayes and Matt Buckley to add some fresh legs and soon it was Hayes taking a nice short pass from Ross Hartley near the posts crash over for a converted try 47-17. Bolton again found themselves with a good overlap on the Dale 22 but a long wild pass went into touch after that let off Dale were in no mood to let up and after another good take in the line out on half way the passes came thick and fast until a deliberate knock on by Bolton gave Dale a penalty scrum good passing from Joesbury and Bradley saw both Brad Fox and Matt Buckley go close. But it was Harry Hayes who had the last word when he took another nice pass from Pat Gillan to score his second try converted by Bradley who had a great afternoon with the boot and make the final score 54-17.

Another good team performance with the new players all doing well special mention to Ieuan Bissell for a great display of attacking rugby .A week off for Easter then the last two games away at Orrell then the Winnington Park re-match at home. Dale have already passed the 100 point mark in their centenary season and with a cup Semi- Final against Widnes to come this will be a season to remember.
David Rhodes R.R.U.F.C.