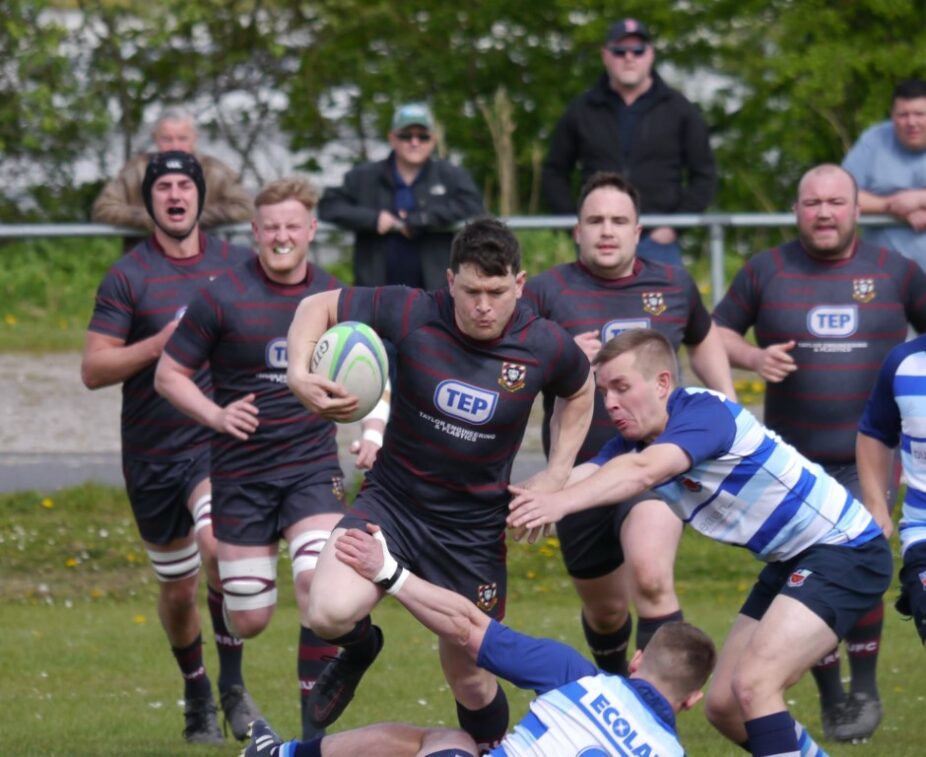 Rochdale 31 Winnington Park 17
Great turnout at Moorgate Ave for Dale’s last home game of the season the re-arranged fixture with Cheshire side Winnington Park. The crowd were expecting lots of tries if the last meeting of these two sides were to be repeated. Dale welcomed back Shaun Needham to the pack and with a full set of backs it promised to be a lively afternoon. The home side were soon on the attack winning a scrum on Winnington’s 22 a penalty was awarded and from the line out on the 5 metre line Dale moved the ball across the park the final pass allowing Pat Gillan to do what he does best and score just wide of the posts the conversion was taken by Keelan Bradley 7-0. Dale continued to press and dominated the opposition 22, a series of penalties against Winnington Park led to the referee giving a penalty try to Dale 14-0.

Good defence by Dale on their own 22 Kyle Parry kicks clear and a high return from the visitors well taken by full back Blair Henry and cleared to beyond half way. Winnington Park kept on attacking and this time a series of penalties saw Dale defending in the red zone and a line out for the visitors on the home 22 led to a nice passing move and a try to them 14-5 with 30 minutes gone. Dale were soon back on the attack with Brad Fox coming close and the relieving kick being well taken by Henry on the 22 he then charged through the Winnington defence to score a great solo try 19-5 the kick falling just short from Bradley. Dale had several chances before half time including a not grounded decision as Jake Castree went over in the corner.

The second half was a masterclass from the Dale backs who had good ball from scrum and line out dominance with Needham and Chris Hodgkinson both doing well. The final pass of a nice scissors move from Bradley and scrum half Joesbury was a judged to be forward as Ieuan Bissell roared in on the wing. Winnington Park were not finished and Dale had some defending to do in their own 22 Tom Callaghan, Harry Hill and Parry all playing their part. The second yellow of the game was given to Jack Green who had to leave the field , far from putting Dale on the back foot it only served to intensify the attacking moves with Fox and Bissell going close but it was Pat Gillan who scored next after a scrum on half way he got the ball wide and carved thru’ the visitors defence to score his second and Dale’s 4th try of the afternoon converted by Bradley 26-5.

Winnington Park kept playing and had their reward on 65 minutes when they found some room wide and finally cracked the Dale defence 26-10. Sadly at this point pack leader Tom Callaghan again succumbed to a shoulder injury and had to leave the field Harry Hayes came on as was soon in the thick of the action being stopped short of the line. The ball came back and Gillan hovering on the 22 took the ball and jinked in for his hat trick of tries in a wonderful performance 31-10. There was just time for the visitors to break from the back of a scrum on the Dale 10 metre line and score a consolation try which was converted leaving the final score 31-17 to Dale, another maximum points performance to leave them 2nd in the league just behind Anselmians. Next Saturday the boys are in the semi-final of the Lancashire Cup at Widnes [yes we know that’s in Cheshire !] the coach leaves at 12 noon from the clubhouse.
David Rhodes R.R.U.F.C.