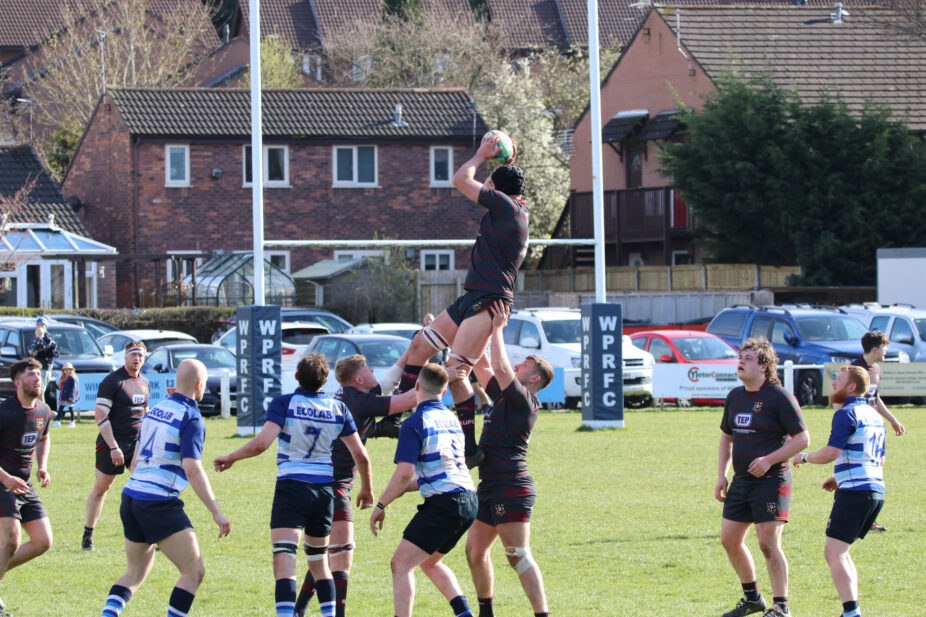 Coach Danny Collins had to ring the changes due to injuries and unavailable players so in came two young backs in the form of Ieuan Bissell and Keelan Bradley both have been doing well in the successful in the 2nd XV and were deemed ready to show their stuff at senior level.

On a bright fresh day in Northwich the pitch was in great condition and it promised to be a good contest with Park currently 4 th in the league and Dale cruising in 2nd looking for the magical 100 points for the centenary season.

Dale had a dream start, from the kick off the ball came to Danny Joesbury who’s chip through bounced on the hard pitch and straight into Ollie Coldman’s hands for him to score by the posts an easy conversion made it 7-0 with less than 2 minutes on the clock. With the hosts still reeling an almost identical move saw the ball move swiftly to Coldman who’s pace left the home defence dead in the water as he swept in for his 2nd try Joesbury converted 14-0.

Winnington came back at the end of the 1st quarter after a penalty saw Dale defending their 5 metre line the ball went wide and was held up but from the resulting scrum the home side scored under the posts for a converted try. 14-7. The shear pace of the game was tremendous with the Young Dale backs moving the ball with pace, Keelan Bradley at No. 10 looked like he was settling in well and a fine pass by him found Pat Gillan on the right wing as he was closed down he chipped over the defenders and cut inside to see the ball bounce into his arms for a great try converted to make it 21-7 with only 25 minutes on the clock. Dale had several great attacks with the line out ball being won and holes appearing in the Park defence and inside pass found Jack Green who strolled over to score 26-7.

The Dale defence had work to do as Park gradually recovered from the battering they had received in the first half hour, they got to the visitors 5 metre line and were give a penalty which the referee reversed for back chat and saw the danger cleared. The ball was moved to half way and then a brilliant move engineered by Joesbury and Bradley gave Gillan enough room to round his opposite number and streak in for his 2nd and Dale’s 4th bonus try converted to make it 33-7. From the re-start the ball was taken by full back Blair Henry and his pass on half way was knocked on by the Park winger who earned himself a yellow card. So down to 14 men the home defence looked even more stretched and a good passing move came to new boy Bissell on the 22 his side step left two defenders for dead and saw him run in a nice debut try. Converted 40-7. Minutes later the backs again combined to find a final pass to Ieuan Bissell coming in from the wing at pace he glided in for his 2nd try and before half time he had his 3rd as a badly timed pass by Park on half way found the predator waiting to run in a great solo effort and leave the score after another conversion at 52-7 a mountain for Winnington Park to climb.

As often happens in games like this Winnington Park came out restored to 15 men with something to prove and with veteran 2nd row Harry Stubbs on they took the game to Dale who had taken their foot off the gas a little and soon found themselves defending in their own 5 metre zone and being penalized for slowing play down eventually the referee showed a yellow card to the Dale No.10 and from the penalty scrum the ball came to Stubbs who broke through to just reach over the line and score 14-52. The next ten minutes were hectic with penalties coming thick and fast and a high tackle giving a line out to Park on the Dale 5 metre line the ball fell again to the big 2nd row Stubbs he crossed the line but appeared not to ground the ball the ref saw it differently and awarded the try the seemingly straightforward conversion struck the post so 26-52 with 20 minutes to go.

A rare penalty to Dale saw them on the home 22 only for the ball to be knocked on in the line. Danny Collins rang the changes in the tiring pack who had done really well with Harry Hayes and Dougie Poole coming on. Desperate defence by Dale saw them covering a line out on their own 5 metre line the ball came through to Stubbs who was well held on the line the ball moved across to the opposite wing for the final try which again all watching from above thought had missed conversion but was given ! Final score 33-52 to Dale a real game of two halves still 5 points and a great games for both Bissell and Bradley two for the future. Next week we have our penultimate home game against Bolton.
David Rhodes R.R.U.F.C.