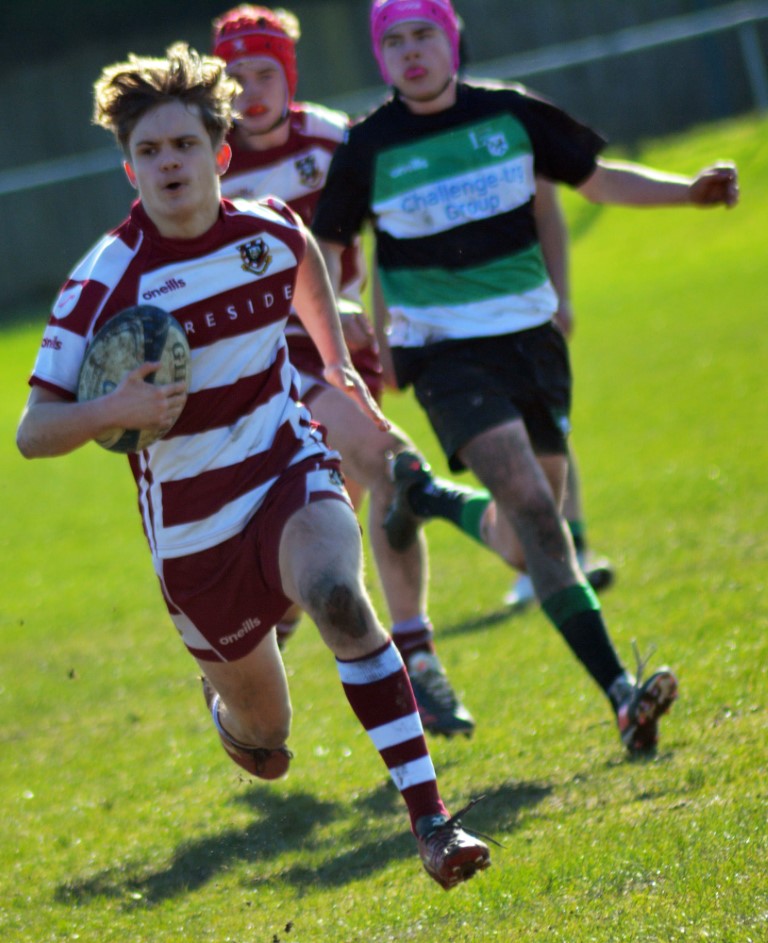 After three weeks of postponed games due to the inclement weather, Rochdale were glad to get back on the paddock for a rematch of their closest league game to date. Having played Lymm earlier in the season away from home and recorded a 27-26 victory, Rochdale knew they would have a tough encounter ahead. Rochdale are still missing a couple of forwards but saw the battle up-front as crucial and were dismayed to hear the game would be played with uncontested scrums as Lymm were unable to field a trained front row. Lymm like to play away from the set pieces and employ a ‘fast and loose’ philosophy with lots of off-loads and as few mauls as possible. Rochdale’s start was very lethargic and probably reflected the lack of match practice. Lymm were on their game straight away and capitalised on Rochdale’s lack of accuracy, registering a penalty after some sustained pressure in the home side’s 22 (0-3).

Rochdale were beginning to find their form and, after numerous attempts to blast over from close range, Mitch Holt cleverly chipped through the oncoming defence to regather and score close to the post (7-3). Lymm were again handed the initiative in the Rochdale 22 after some sloppy play gave them a scrum and allowed them to run a set move, putting their Number 8 through a gap where he crossed unopposed (7-10).

There followed a period of stalemate with neither team really establishing dominance. Rochdale were eventually presented with an opportunity after a failed kick was knocked-on behind the Lymm goal line giving Rochdale a 5-meter scrum, from which Number 8 Ben Sunderland powered over for the score (12-10). Rochdale were hitting their straps now and scored again after some good defence turned over the ball; quick transference had the ball in Tom Hesketh’s hands and the right wing scorched away down the flank. The Lymm fullback halted his progress, but Hesketh was not to be denied – after regaining his feet, he received the ball from the ensuing ruck and was able to cross in the corner (17-10).

Rochdale fielded the restart and Nick Wright sent the ball high off the boot. Lymm were unable to recover the kick and a favourable bounce allowed Sunderland to off-load to Will Simmons who broke through the defence and sprinted clear to score under the post (24-10).

Rochdale took the restart cleanly and another well placed box kick from Zac Baker, the Rochdale scrum half, had the Lymm defence all at sea. Sunderland was on hand again to regather the bouncing ball, break free and dummy the fullback before sprinting clear to the line (31-10). There was just time for Rochdale to score another try before the break. After a ruck set up in the middle of the pitch, James O’Connell chipped over the defence and Garrett Myers recovered the ball to touch down close to the post (38-10).

The second half began as the first with the visitors taking the initiative and building up pressure in the Rochdale 22. Lymm were rewarded with a try after some nice handling put the right winger in at the corner (38-15). However, any ideas of a comeback were quickly dispelled when, from a scrum in the Lymm 22, Baker executed a nice run around on the inside centre and cut through the defence to score close in (45-15). The game settled into a midfield battle with both teams having forays into their opponent’s 22 but unable to convert any of the opportunities created. With time running out Rochdale claimed the final score after another scintillating break from Hesketh; the quickly recycled ball allowed Baker to make the break and off-load to Holt who scored in the corner (50-15).

The game was probably decided in the ten minutes prior to half time when Rochdale scored their four quick tries. The Rochdale defence did what it had done all year and shut down their opponents attacking threat. The hard work was done up front with excellent performances from Jacob Jackson and Alex Barry, the latter receiving the MoTM award for strong carries, hard tackling and efficient lineout work.