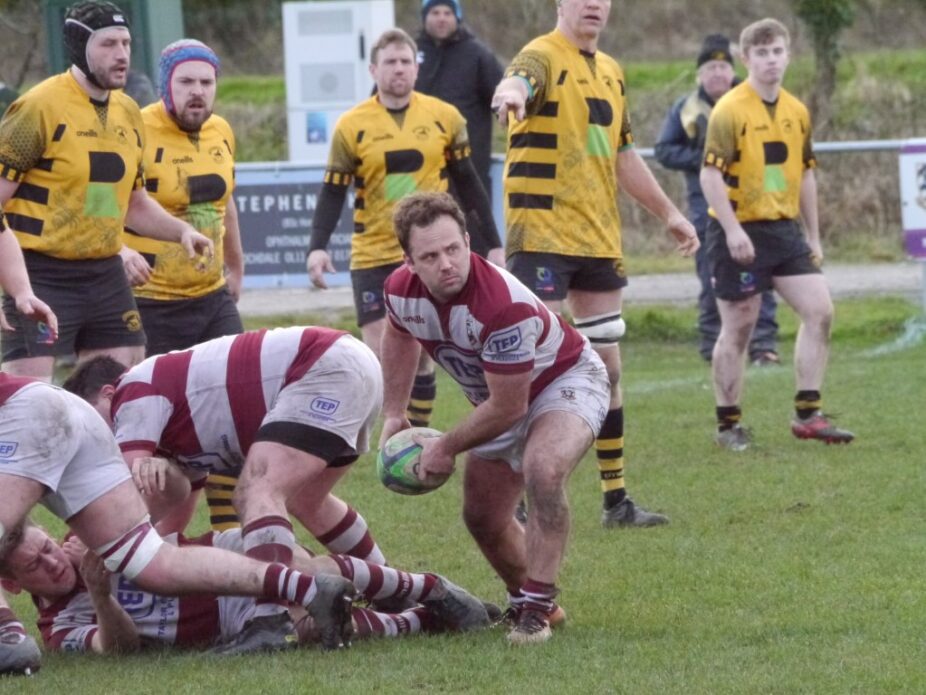 Rochdale were without captain Dom Serridge , Ben Coulter and Chris Hodgkinson from the pack and Pat Gillan from the backs. In came Jonny Bradley, Eddie Shanks and Brad Fox. Cockermouth were tough opponents in the first game of the season when Dale only beat the Cumbrians in the final minutes of the game.

Rochdale’s pitch had recovered well from the recent rainy spell and promised a good surface for Dale’s backs to play their usual expansive game. In the early exchanges the Cockermouth pack looked dangerous but solid play by the Dale defence held them and most of the attacking was from the home backs with Travis Townsend leading the charge with some deft passing and nice chip kicks over the slow moving visitors. Dale came close when a kick by Ollie Coldman was just cleared into touch by the Cockermouth full back. A high box kick from the visitors 5 metre area was well taken by Blair Henry but he was held on the 22 and the scrum went to Cockermouth.

Next an injury to Jack Green saw him side lined and super sub Ross Hartley came on, good break from Josh Schofield playing at centre was held up on the 10 metre line but ball fed out to the ever willing Harry Hayes who burst through several tackles but stopped just short. Dale had to make something of all their possession and it was on 20 minutes that Schofield broke through the visitors defence line and slipped a nice inside pass to 2nd row Foster who ploughed through the final defenders for the first try the conversion going just wide 5-0. Schofield and winger Matt Buckley combined well but the attack ended in a scrum to Cockermouth with a penalty on the Dale 10 metre line stubborn defence kept the visitors at bay.

Rochdale had a chance to extend their lead when Coldman took a penalty 35 metres out but the ball went just wide in the swirling wind. Cockermouth had two penalty scrums in the Dale 22 and from the 2nd they went over under the posts for a converted try 5-7. Dale were soon back in the visitors half and a great take from Buckley on the left wing saw him go in at the corner only to be pulled back by the touch judge for a foot just in touch. Another fine take of a box kick by Henry saw him go across field and find Schofield who skipped through a couple of despairing tackles to score a great centres try converted by Coldman 12-7 as we went in for half time.

The 2nd half started well for Dale when a high kick from the ever present Travis Townsend found winger Matt Buckley wide on the right and he made no mistake with a good catch and dive over, the conversion was wide so 17-7. Cockermouth would not lie down and fuelled by some clever breaks by their scrum half found themselves pressing on the Dale 22 a penalty for offside against the home side saw a good chance for 3 points but the kick struck the upright.

After that let off it was all Dale with Tommy Callaghan on to bolster the front row and Tom Hindle and Eddie Shanks doing the hard work in the 2nd more possession allowed Brad Fox and Townsend to take the ball close to the visitors line , but it was a wide pass by Coldman that found winger Buckley lurking and in he went for a 2nd try. The conversion looked unlikely from the right touchline into a strong wind but Coldman slotted with ease for the extras 24-7.

Cockermouth had one last chance with a penalty scrum in the Dale red zone but good defence from Jake Castree and Tom Callaghan snuffed out the threat and it was back to the other end with a high box kick by Townsend knocked on by the visitors from the scrum Dale forwards broke through and a hacked on ball was collected by Ross Hartley who crashed over for a rare try converted by Coldman 31-7 was the final score a good all round performance only marred by a last minute injury to Schofield who dislocated his elbow in a tackle and will be missing for a while. Next week we revert to 3pm kick off and host Southport.