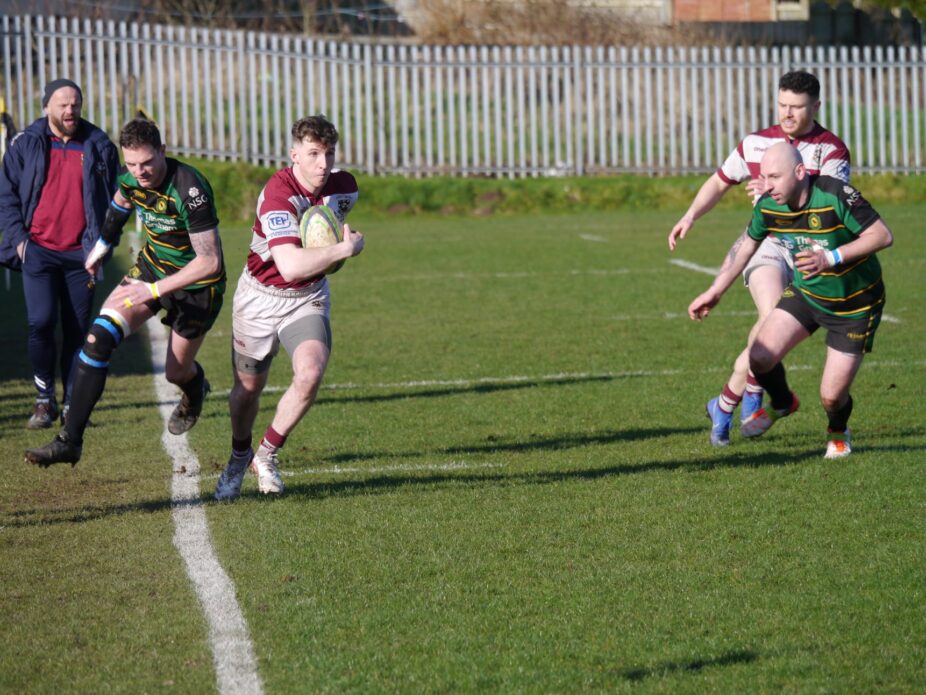 Having boarded their coach at Rochdale RUFC in heavy rain and with no prospect of play if the game had been at home, it was more than a pleasant surprise to arrive in a dry Whitehaven with a firm pitch made for good rugby.

Rochdale showed their intentions when at the first scrum; they pushed their larger opponents back. Shortly afterwards in the 4th minute, quick ball out to Gillan on the right wing saw him squeeze down the touchline to score. (0-5). In the 10th minute, a backs move saw the ball out to Gillan again, who had much to do but beat off 4 tacklers to score nearer the posts. Coldman added the conversion (0-12). Unfortunately in the 15th minute, Ben Coulter had to leave the pitch with a broken collarbone and Callaghan came on in his place. In the 22nd minute, Joesbury went over for another try converted by Coldman (0-19). At this stage, the Rochdale scrum was dominant and providing plenty of good ball for the backs. HT 0-19

The 2nd half was only 4 minutes old when Gillan went over for another try converted by Coldman (0-26). A good break by St Benedicts was only stopped when the referee brought the play back for a scrum to Rochdale following a knock on in the build-up.

A good driving maul by the Rochdale pack followed a steal of a St Benedicts lineout; this was stopped by good defensive work by the opponents. In the 61st minute, Jack Green received a Yellow Card for a high tackle.

In the 68th minute, Gillan scored his 4th try of the game (0-31). In the 73rd minute, Schofield showed a quick acceleration past the St Benedicts tiring defence to score a try converted by Coldman (0-38). With the last play, St Benedicts got some reward for not giving up by scoring the final try of the game (5-38).

A good run out for the Rochdale team that could have led to a larger score line except for a number of uncharacteristic knock ons. All eyes turn now to next Saturday’s home game against Cockermouth where the team will look to keep their momentum going in their pursuit of top spot in the league.