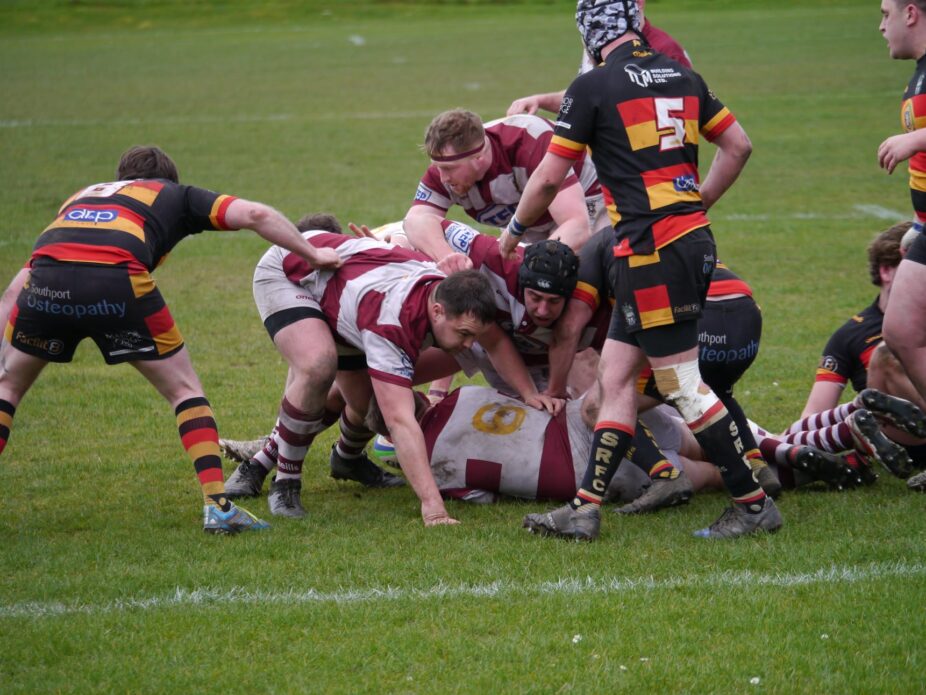 Rochdale welcomed back captain Dom Serridge as well as Pat Gillan and Danny Joesbury , Southport started the game with a deep kick off well taken by Tom Callaghan and driven forward by the pack the visitors knocked on at the maul and were soon back on their 10 metre line but good defence kept Dale at bay. The Dale backs led by Travis Townsend with good support from Ross Hartley in at centre and captain Serridge saw the home side knocking at the door without the final pass to break the defensive line. It was the visitors who had the first real chance when they were awarded a penalty on the Dale 22 in front of the posts but the Southport fly half made a complete hash of it so the scores remained level.

Dale still had some defending to do before a deep kick by Southport was taken by Blair Bomber Henry who cut across the pitch to find winger Gillan but his pass to Jake Castree supporting went to the opposition winger instead and attack turned to defence Dale needed a score and it came on 20 minutes when a clever passing move found winger Henry who ran in to the corner to score the conversion was missed 5-0. A scrum to Dale on the visitors 22 led to a good break and a powerful drive by the Dale pack ended with hooker Kyle Parry scoring under the posts Ollie Coldman converted 12-0.

Dale had another penalty on half way but a forward pass led to a scrum for the visitors they broke away but a great rip tackle by Hartley won the ball back only to see a pass from Townsend judged forward, the scrum was won by Danny Joesbury and the scrum half made a great brake ended with a grubber kick that was taken by Henry who was held just short of the line. Half Time 12-0.

An early line out was well taken by Chris Hodgkinson laid off to Castree but he was taken into touch on half way. Dale had all the possession with Harry Hayes and Tom Hindle both having good breaks , Travis Townsend was always probing from full back and one kick beat the Southport defence but rolled into touch before Gillan could reach it. Play stopped for a couple of injuries and captain Serridge was forced off with a damaged thumb. Coach Danny Collins made several changes with Brad Fox coming on for Serridge and Jonny Bradley and Eddie Shanks moved into the pack. Next into the fray was last weeks four try hero Pat Gillan who got the ball on the 22 and streaked in to the corner to score, the conversion was just wide 17-0. Dale were soon back on the attack and another long pass to winger Henry saw him tackled just short of the line. Two yellow cards now disrupted the play as Jake Castree had 10 minutes off for a high tackle and the Southport prop also walked for dangerous play. With the hooker already off injured it led to uncontested scrums.

A scrum on the Southport 10 metre line led to a good series of passes to the right wing finding the every ready Hayes bursting through for the bonus try, Townsend took over the kicking and converted well 24-0. Dougie Poole came on for his first senior game replacing Tom Callaghan who had played his usual solid game.

Southport had a line out on their own 22 but Hodgkinson who had a good day in the centre of the line pinched the ball. The ball came out to Castree who had just come back on and he drove over for fine try, the conversion was just short 29-0. The Dale backs were now completely dominant and a break in midfield was passed out to Brad Fox who crashed in for the final score Townsend converted so 36-0 was the final score.

Southport will feel hard done by but they lacked the final power to score against a well drilled Dale defence and came up against probably the best set of backs in the Division. Next week Dale travel to Tarleton looking for another maximum points result.
David Rhodes. R.R.U.F.C.