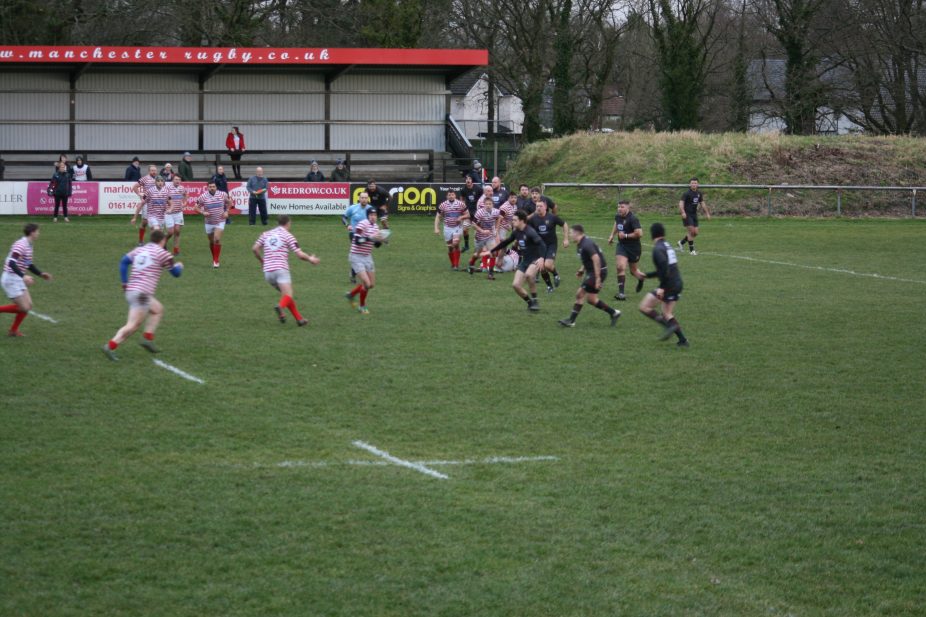 With the exception of Ollie Coldman [injured] and Harry Hill [suspended] coach Danny Collins had a full strength team with Travis Townsend on the bench. Rochdale had beaten Manchester in the second game of the season but did not have a good record at Grove Park.

A good sized crowd for this top of the table clash greeted the two sides, Dale started strongly and were soon awarded a penalty for a high tackle on Harry Hayes , Nick Ahearn found touch on the Manchester 22. The ball was lost on the 5 metre line. Manchester kicked to their own 22 but the line out by Dale was judged not straight and from the scrum their captain Charlie Ding jinked through some poor Dale tackles to score under the posts the conversion followed 7-0.

Dale came back strongly and only another penalty for a high tackle by Jonny Bradley saw the home side back in the Dale 22. Dale had the ball back when the throw was long and Hayes collected at the tail for James Duffy playing at full back to clear to half way a somewhat panicked hack kick from the Manchester winger fell to Duffy who launched a high kick to touch. From the scrum Manchester were penalized and then sent back a further 10 metres for back chat, with the Hooker yellow carded , Dale were on the front foot now and good breaks by Hayes and the ever present Sean Needham  saw them on the home 22 yet another penalty and Nick Ahearn kicked to within 10 metres of the Manchester line, despite being penalized harshly for not releasing Dale came back from their own half and Duffy backing up a Needham break crashed over for Dale’s first try the conversion by Ahearn dropped on the crossbar so 7-5 after 30 minutes.

Continuing Dale pressure and a series of penalties from the pedantic referee saw the score remain same as half time approached but then a series of harsh decisions against Dale saw two yellow cards one for a deliberate knock on and then against Needham for a line out infringement saw Dale down to 13 for the last 5 minutes of the half.

The resulting penalty was kicked 10-5, then as we ran into the 48th minute the Manchester full back James Graham who had been almost anonymous during the half linked up with the captain Ding to power over and score under the posts 17-5.

Half time saw Travis Townsend come on at scrum half and soon after the re-start Rochdale were back to 14 men and with Townsend running the show Dale looked good and minutes later Needham returned to the fray ….game on.

But the home side defended well on their own line and despite 4 or 5 infringements inside the 5 metre area the so called red zone no cards appeared and no penalty try awarded by the previously pedantic referee. Manchester took advantage of some poor Dale tackling and their charismatic captain Ding went in again under the posts 24-5.

Again all the possession was with Dale without any points to show for it. Two kicking errors by Dale gave the ball back to Manchester who used it well and with a chip and run by full back Graham saw the first of two tries in the final minutes of the game with Dale tiring the score leapt to 36-10 which flattered the home side somewhat. Dale had lots of possession and were camped in the Manchester 5 metre zone for large parts of the game but indiscipline and poor tackling cost them the top spot in the league which Manchester gratefully occupied at the end of the game.

Next week Dale are at home to Sefton and need to bounce back to winning ways.