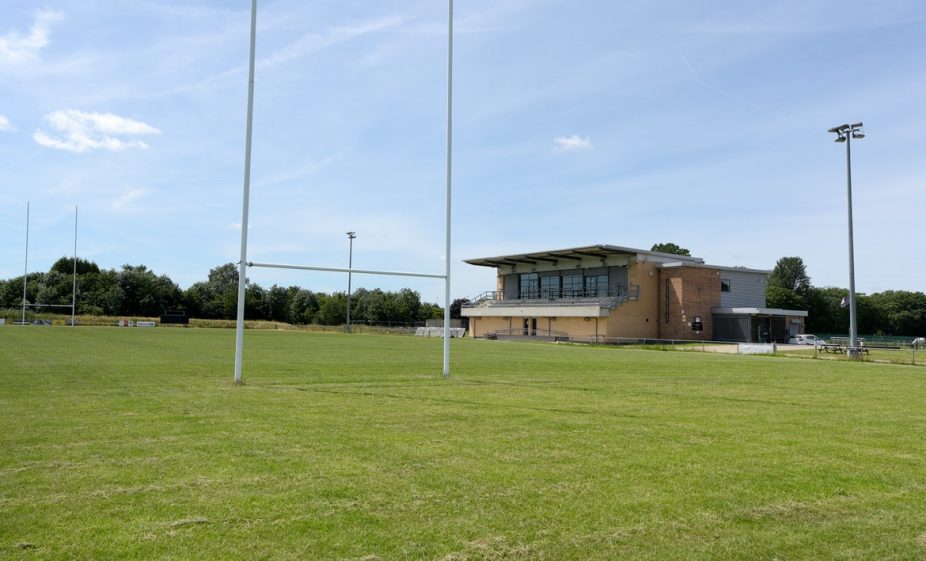 We took a squad of 23 down to play a Broughton Park / Old Bedians combined team at their fantastic facilities south of Manchester. The weather was dry and pleasant, and a great set up for our first game of the new decade! The teams were split into two, each team to play 2x 30 minute games, but in order to even numbers up we were to play 9 a side.

Rochdale started strong, first to the breakdowns. Good mauling & rucking, overpowered the Broughton pack & provided good ball to the backs. Jethro took an unfortunate knock on the ankle and was subbed off which weakened the Rochdale front row. Broughton capitalised and started to assert themselves. At half time it was 3-0 up to Rochdale we and looked in command.

Broughton came out in the second half with a different game plan, spreading the ball around and finding holes in the Rochdale defence. Some dogged play, and before long the scores had been leveled to make it 3-3.

Drew then took Broughton on with one of his tenacious runs, and he sparked Rochdale back into life, lifting the rest of the Rochdale team. With their tails flying the pressure intensified and the game was won 7-4 at the final whistle, the final two tries sealed by George and Oliver apiece. A good win for the Rochdale boys. Well done lads, good team effort.

A quick mention to Louie who volunteered to play for Broughton when they went a man down and scored Broughton’s 4th with a great run In to the corner. Tries: Max Rawlinson x2, Adam, Oliver x2, George & Alfie

1-0 , George with a great run and quick try for Rochdale.
1-1 Broughton finding a hole in what had been strong Rochdale defence
2-1 Adam with a piercing run through Broughton backs.

Broughton came back at Rochdale, with Max R making a try saving tackle and somehow keeping Broughton out they quickly recycled to make it 2-2

3-2 arrived by way of a cracking dummy and side step by Adam, sending Broughton all the wrong way leaving the path open for a clear run in. Nicely done. A great steal at the ruck by Jethro helped Rochdale clear the lines and setup counter attack. Alfie was having a cracking game. All over the Broughton players and eventually awarded with a try 4-2.

Great offensive play again by Alfie helped to stop the Broughton reply. Not to be outshone, Oliver made it over the line to make it 5-2, excellent play at the breakdowns by Rochdale. The Rochdale pack was now dominant in the loose. Max R went over to give Rochdale a commanding lead 6-2; Max E making a tackle and at the ruck stealing the ball to setup Max R to run the ball into the corner

Broughton got their consolation try in the last seconds of the game taking it to a final score of 6-3 to Rochdale. Another great team effort. Well done lads. Two good wins against strong opposition.

With a slightly experimental squad set up putting Oliver Dowthwaite in at hooker, and giving Kian his first proper game we had an array of talent ready to go.

We hadn’t started in gear, and sensing that Broughton immediately applied pressure from the kick off, and converted that pressure into points shortly after. Mince pies forgotten, we then put together 2 consecutive sweet line moves with Kian, Noah and Jake digging the ball out of the rucks. Isaac finding himself in the three quarters then drew in the outside player before offloading to Casey who ran in a solid try. Minutes later in almost carbon copy circumstances, this time it was Oliver D who received a great pass out from Will, straightened his run, and offloaded to a grateful Casey for his 2nd try. 2-1 Rochdale.

Our attack had warmed up, but our defence was still thawing and Broughton sensed our players all getting sucked in, and unleashed a great line move of their own, easily getting round the side of us to level the scores at 2-2.

As the first half concluded, a sublime speculative cross field kick from near our line saw Casey in acres of space, with the Broughton players stopped and resigned to conceding .. with thoughts of a hat-trick obviously playing in his mind, unfortunately the ball was knocked on and we finished the half on level terms .. it’s happened to the best of us!

At half time Alex and Finn took to the field, and having discussed poor tackling technique, Noah set a quick marker by gathering and racing down the touchline to give Rochdale the early 2nd half advantage, 3-2.

Will then made a superb covering tackle with the try line staring Broughton in the face to win the ball back .. unfortunately the ensuing kick was charged down and from the restart a neat Broughton move meant no mistakes as they leveled again. 3-3

From the restart lovely interplay from the Johnson brothers saw Casey all but score as he was agonisingly bundled into touch just feet from the line after a lovely pass from Will. And with the clock ticking away, we then recycled the ball 4 times, exceptional work from Kian, Michael and Isaac followed by intelligent distribution from Saw Bowers saw Noah finally break their line and complete the half with the win. 4-3

The second game was to be shortened 10 minute halves, and also feature added James Richardson razzle-dazzle as our subs continued to rotate!

From the start the new look Old Bedians / Broughton Park team got stuck in, having also gained Bailey as their inside man who had volunteered to step up and seemed to be relishing the game. A scrum won by them against the head saw them fire it back to the three quarters.

They lamped the ball downfield and the resultant chase and gather made it 1-0. We quickly returned the pressure and after Alex had gathered the ball off the ground, their offside saw Will take a quick penalty and bulldozer over to equal 1-1.

From the restart a heartening display of excellent counter rucking from Michael and Kian, saw Isaac retrieve the ball and fire it to Finn who straightened his run, and then released Casey to fly over for 2-1. Not to be outdone our opponents then showed off their own great handling skills and after some really lovely offloading gained their deserved equaliser, 2-2.

James and Sam B disrupted their line nicely and as Jake stole the ball back, he offloaded to Noah who chipped over for Finn to chase and convert 3-2. A sequence of penalties arising from hands in the ruck saw them camped on our try line and despite 3 sets of heroic defending, we were eventually breached 3-3.

And with the clock running down, a tough period of play saw them eventually run round the outside of our line despite Noahs frantic chase to close the scoring 4-3.

Excellent effort by all, played in a really positive spirit and with very heartening performances coming in from our newest recruits! We will look forward to playing them again.