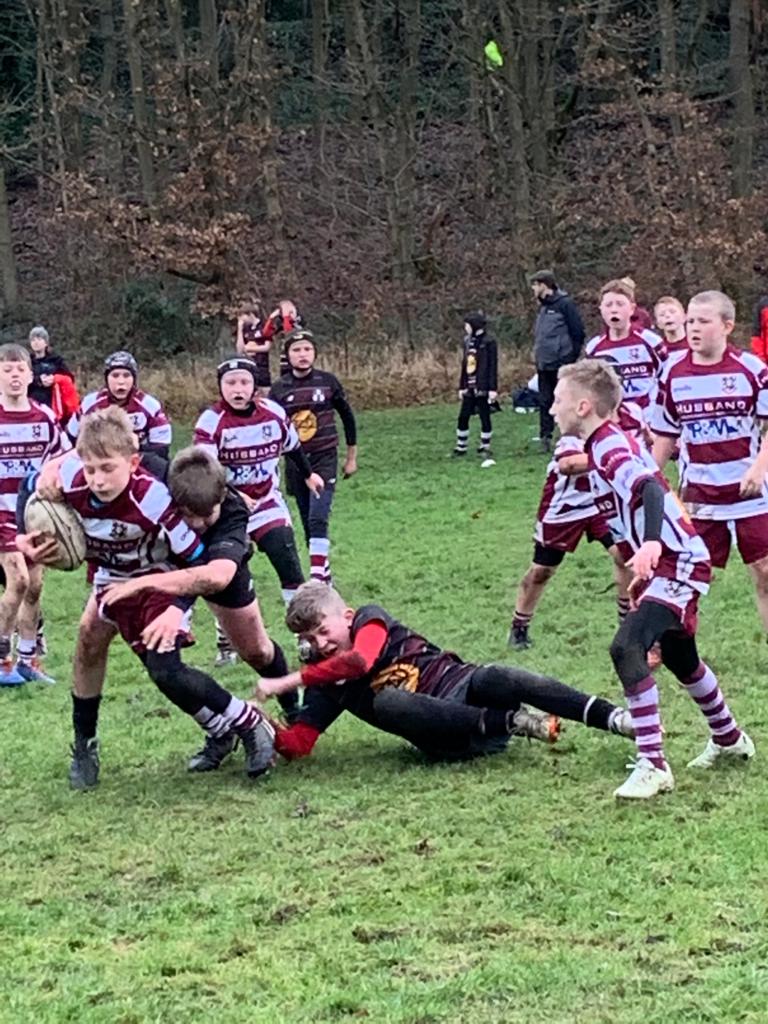 This was going to be a really tough morning given the last encounter. Duncan gave a rallying call asking for intensity in the last game of the decade!

1st try Rishworth, after some good play from both sides. Rishworth caught Rochdale flat footed and broke through the defence. Will pierced through the on rushing Rishworth defence from the restart to give Rochdale their first try. 1-1

Hard tackling by Rochdale, good offence but just caught offside, penalty to Rishworth. Superb passing down the line saw Rishworth in the corner 2-1. A good take from the restart and Rishworth tore through centre of the Rochdale defence to make it 3-1. We had plenty of ball but were struggling to convert that into yards, trying to spread the ball but tough Rishworth defence kept Rochdale at bay.

A great interception effort from Freddie, but unlucky the ball did not go stick to the hand. The quarter ended with a tight and high Rishworth defence giving Rochdale no room, and no time to pull the game back.
Very evenly matched.

Hari G gathered from the from kick off, and a good run from Max R was encouraging but then turned over.A long period followed as Rochdale held Rishworth with good strong defence, but ultimately were unable to keep Rishworth out. A 1st try in corner from a scrum to Rishworth. 1-0.

Great pressure from Rochdale kick led by Isaac. The ball went loose in the breakdown, and Rishworth took advantage with a superb offload. 2-0

A few missed tackles by Rochdale and Rishworth capitalised taking the lead to 3-0. Rishworth with their tails up & running then came straight through the centre of Rochdale’s defence for a fourth, then after some good handling from Rochdale we were only going sideways. Rish eventually regained possession and a try at the end made it 5-0 at the whistle for full time.

Second Half – Team 1
A great take and run by Rishworth. A certain try was it not for a superb piece of skill from Will, tap tackle & timed to perfection. A great steal by Jethro but dropped ball stopped play.

Rochdale were now looking really strong at the breakdowns, and duly scored a try with Jethro crossing the line. 1-0

A good take from the kick off & missed tackles by Rochdale gifted Rishworth a try to level the scores. From the restart great tenacity shown from Drew, making valuable yards through the entire Rishworth pack, and another interception from Freddie, who was unlucky not to break and go clear.

Ruck & maul on Rishworth line, quick thinking from Jethro picking up and going over to make it 2-1. Rochdale were then pinned on their try line for the final minutes but held tight, good defence. Great win 2-1 for the third quarter!

Second Half – Team 2
A take from the kick off and almost immediately a try 1-0 to Rishworth.
Poor tackling from Rochdale saw saw come through again easily. 2-0. Despite the valiant efforts of Finn trying to keep Rishworth out they forced their way over to make it 3-0.

A rare attacking highlight with a great run from Max R, only a high tackle preventing him from going all the way, penalty to Rochdale. Another high tackle this time on Hari G but sadly the resulting penalty was wasted by a knock on.

Good hands again from the scrum by Rishworth & they duly converted the possession with a try in the corner. 4-0.

Undeterred, great tackling again from Finn, leading the way and a superb tackle by Harri G, kept Rishworth from adding to their score. Shortlived relief however as Rish passed down the line from the scrum – 5-0.

A great rip and run, Finn offloaded but unfortunately did not go to hand. Hari G put in the tackle of the day stopping one of Rish star players in his tracks prompting a round of applause all round!

Final whistle and a great effort by all. A great display by Rishworth, and we looked like a team who had not played a competitive game of rugby for over a month .. good to get some cobwebs out before Christmas!