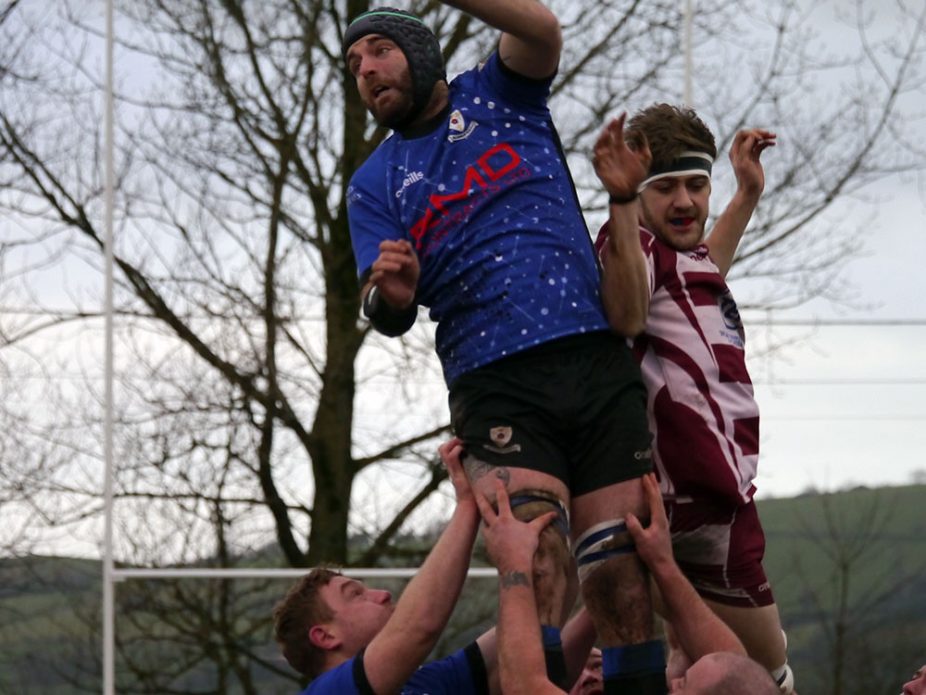 On a wild day in the Derbyshire hills Dale attempted to hold on to their 100% record for the season in the last game of 2019. The game was in doubt until a pitch inspection on Saturday morning but the pitch was deemed fit by match officals , this was as well as Glossop were celebrating their 50th anniversary playing Dale who had been their opponents in the first game as a reformed club back in 1969.

Danny Collins had almost a full team to choose from with the exception of the suspended Harry Hill and injured Ollie Coldman. Tom Helliwell was due to start in the 2nd row but broke down in the pre-match warm up. The opening minutes saw an exchange of penalties with both sides failing to find touch in the swirling wind, from a scrum on the Glossop 22 prop forward Dale Slamon broke away but his pass found winger Josh Boardman on the touch line where he  was bundled over the  line and a promising move was ended.

Nick Ahearn tried a chip over the Glossop defence and was unlucky to see his effort taken into touch on the home side’s 5 metre line Dale took the scrum but were forced back to the 22 by some resolute defending by the Glossop pack. This was clearly going to be a forwards day and only another clever kick through by Ahearn left the Glossop full back caught on his own try line Ahearn was a judged to have fouled the 15 in his tackle and despite Ahearn being laid out with an eye injury the penalty allowed Glossop to clear their lines.

Minutes later the Rochdale fly half had a chance to open the scoring with a penalty kick on the Glossop 22 but saw his effort drift just wide. Both sides battled to make inroads but as half time loomed the deadlock remained unbroken.

Dale then knocked on and gave away a scrum on their own 22 a penalty ensued and the Glossop full back stepped up to score on the stroke of half time 3-0.

The second half saw Dale attacking down the hill and soon were given a penalty 30 metres out James Duffy took the kick and made it 3-3 game on !

Dale were dominating possession and a good break by Chris Hodgkinson saw the ball passed inside to supporting Sean Needham who was bundled into touch just short of the line.

The Dale pressure continued to mount a try would just not come , desperate defending by Glossop ended in another penalty chance on the home sides 22 the kick went over 3-6 but minutes later with Glossop pressing the referee awarded the home side a penalty for off side and the full back again obliged 6-6. Both sides did everything to score and Dale were unlucky being held repeatedly in the red zone good efforts by Ross Hartley and Needham failed to bring points. In the last quarter Dale had plenty of defending to do with the big crowd baying for a Glossop try and only stout tackling by Tom Hindle , Jonny Bradley and the ever present Needham held them out. Dale had one last attack with Harry Hayes tackled high on the Glossop 22 the kick from Ahearn went over and Dale had the elusive lead at 9-6.

There was just time for one last Glossop attack and when the referee penalized Dale in front of their posts it was inevitable the full back would go for the points and a draw so the final score in this entertaining game played in harsh conditions was 9-9 honours even. Celebrations in the club house began and our hosts enjoyed their Anniversary to the full.

A two week break now until 4th of January 2020 when Dale travel to West Park to take on Manchester in what promises to be the show down game of the season.
David Rhodes R.R.U.F.C.