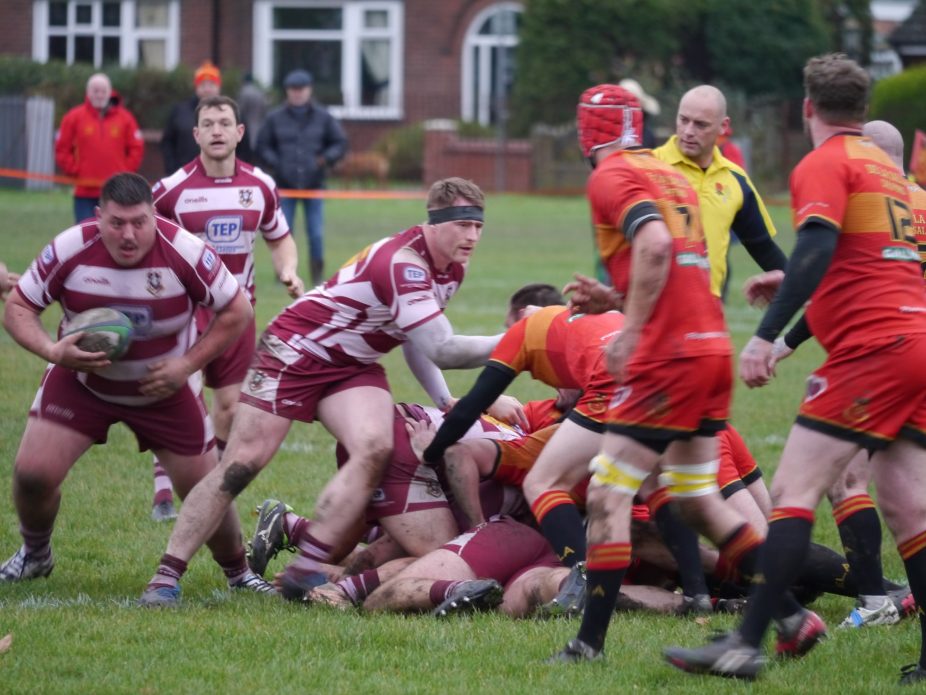 Dale travelled to Salford for what promised to be a tough encounter with recently promoted De La Salle, Sean Needham was missing but otherwise a full strength team.

They started well and within five minutes were in the lead when Ross Hartley broke through near the left touchline to score Nick Ahearn added the extras 7-0. Ahearn tried  chip over the home sides defence but the ball was gathered and De La Salle were on the attack in the Dale 22, good defence but after a series of scrums the referee gave a penalty for a deliberate knock on in front of the posts and yellow carded Harry Hayes in the bargain. The kick went over so 7-3 and Dale down to 14 men.

A poor kick off gave the home side the ball on half way but great defence led by captain Tom Hindle saw the ball back with the visitors and  Dale Slamon battered his way through supported by Harry Hill who touched down, Ahearn’s conversion hit the upright so 12-3 after 15 minutes.

Dale now had their tails up and were camped in the De La Salle 22 one move involved ten phases and ended in a penalty Ahearn found touch and Dale won the line out on the home 10 metre line a cheeky grubber kick by ever present scrum half Travis Townsend was followed up by the backs but play stopped by the ref for a forward pass. Dale defended well from the scrum and when the ball broke to Ollie Coldman his impressive run was only stopped back on the De La Salle 22. The constant Dale pressure led to a penalty which Ahearn dispatched to make it 15-3 as we approached half time. The half ended with the home side’s No. 8 being yellow carded for back chat. 15-3.

The second half started where the first had left off with Dale carrying the ball well from the kick off and with the pack dominating Andrew Foster went over and Ahearn converted to make it 22-3. Minutes later it was De La Salle on the attack as Dale lost the ball on half way a good passing move saw the big second row go over for a converted try 22-10. The home side could have got closer but for a bad miss from a penalty on the Dale 22 in front of the posts. The Dale drop out saw Ollie Coldman kick deep into the opponents half and Gui Desusa back in the side for injured Tom Helliwell break in an impressive run to the home 22. At the next scrum coach Danny Collins rang the changes with Rob Wadsworth replacing the  hard working Foster and Tom Callaghan taking over from Dale Slamon in the front row Dale were also restored to 15 by the return of Harry Hayes from the bin.

Wadsworth was soon in the action breaking from a scrum on the opponents 22 he made good yards but his pass to winger Josh Boardman was judged  forward  . De La Salle had a good break down the left and Dale were fortunate to see the ref disallow the try for a forward pass. Shortly after Harry Hill was yellow carded somewhat harshly so Dale were back to 14 and having to defend against a rejuvenated De La Salle attack with their big No. 8 restored. Good defence saw Dale escape from their own 5 metre line and the relieving kick from Coldman reach the half way line.  Dale were hungry for the fourth bonus point try and it was supplied by Coldman linking well with the pack to score and with Ahearn adding the extras it was 29-10 as the ref blew the final whistle.

This was despite the score a hard fought win against a tenacious opponent. A rest next week before Dale travel to old foes Eccles on the 28th November.