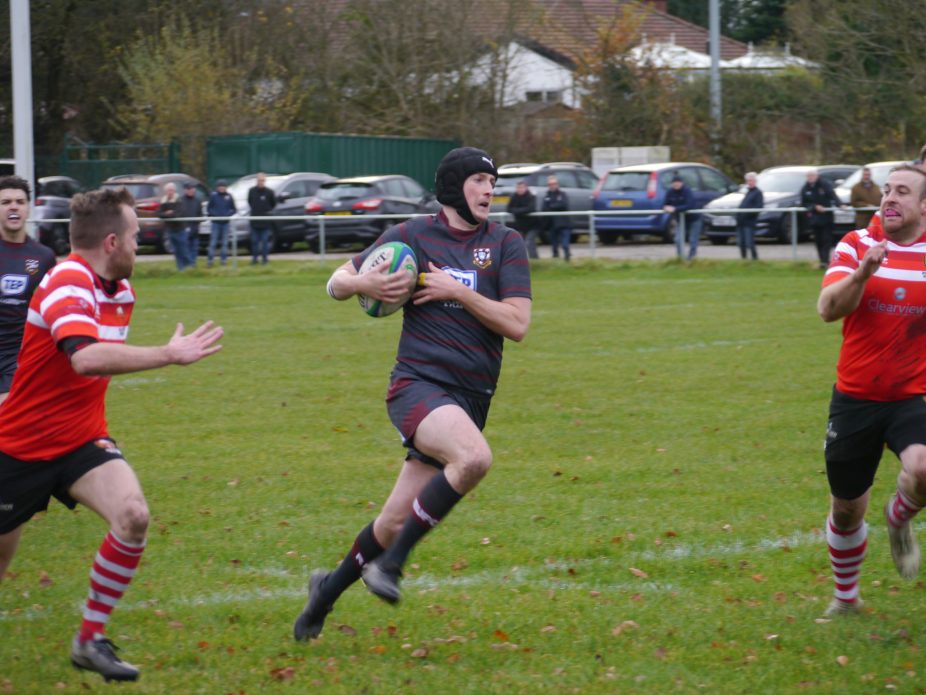 If last year’s result was anything to go by Dale would meet their toughest challenge so far in a Bolton side who have made a good start in the Division. With Tom Hindle returning as captain along with Sean Needham and the welcome return of Jonny Bradley, Dale had a near full strength side and it promised to be a great game.

In near perfect conditions Dale started well but soon found the visitors pack a tough nut to crack conceding an early penalty on their own 22. From the line out quick ball enabled Bolton to move play to the right wing and after a fumble on the line they went over but the eagle eyed young referee spotted a knock on and the try was disallowed, an early let off for Dale.

The home side were soon back on the attack and despite conceding a penalty on the Bolton 22 the ball was soon back with Sean Needham who linked well with scrum half Travis Townsend to create a two man overlap on the right side the ball was flicked through to Jackson Kelly who juggled the ball but managed to go over for the 1st try, converted by Nick Ahearn 7-0 after 17 minutes.

The visitors had a  great chance to get on the score sheet when after a strong attack stopped on the line by a last ditch tackle by Ahearn they were awarded a penalty on the Dale 22 in front of the posts with little or no wind it looked a banker 3 points but somehow the kicker pulled the effort wide.

Bolton’s frustration at not being able to beat the solid Dale defence led by Tom Hindle, Harry Hayes and the ever willing Ross Hartley saw them concede a penalty just inside their half but back chat to the referee saw them 10 metres further back and their second row yellow carded for dissent. Dale took the scrum and the ball broke to the right with quick passes by Ollie Coldman and Townsend who gave winger Josh Boardman the chance to run in a fine try. The conversion wen just wide 12-0 at half time.

Bolton came out in the 2nd half with all guns blazing and only dogged Dale defence held them on the 22 where play was held up with an injury to their captain Murphy, when the game resumed Dale won the ball back and started to string together some great passes including a massive Antipodean style pass by Ahearn to the winger Kelly who collected the ball with a foot in touch. The pressure was back on the visitors and they were penalized again on the 22 up stepped Ahearn and slotted the kick with ease 15-0 after 48 mins.

But for some poor passing and dropped ball Dale would have been further ahead but they had to wait until the 70 th minute when Ahearn placed a free kick deep into the Bolton half and from the scrum Dom Serridge popped up to score near the posts an easy conversion left the score 22-0.

Dale still had some defending to do and with replacements Tom Helliwell and Jonny Bradley on they held the visitors on the 22 and from a scrum the ball broke to Ahearn who jinked through two tackles and started a glorious counter attacking move the full length of the pitch with winger Kelly going in at the corner.  Ahearn  took the conversion from the touchline but saw the kick go just wide making it 27-0.with minutes to go.

Bolton kept on trying and finally got their consolation score when after a good passing move they finally found a gap to score in the corner the extras were added and the final score was 27-7 to Dale with the vital bonus point secured. A  finegame of rugby several great Dale performances Nick Ahearn deserves a mention for his attacking play and steady kicking.

Next week a short trip to De la Salle on the banks of the Irwell for a 2.15 kick off.