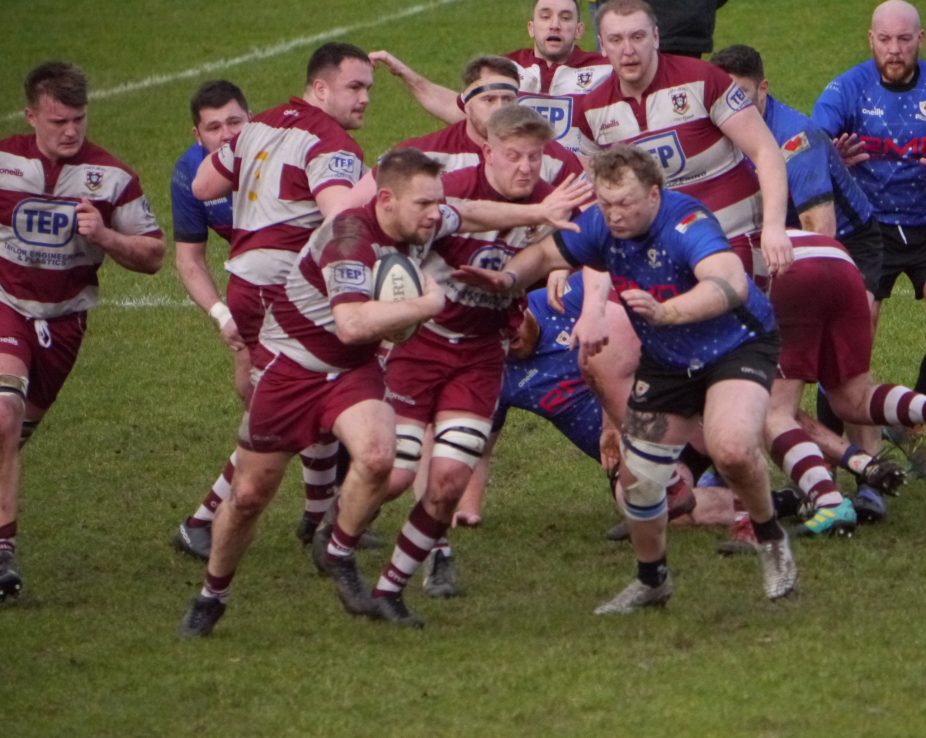 Considering all the rain over the last week the pitch at Hargate Hill was in good condition and we even had some sunshine to start the game always a hard fought contest against the Derbyshire side. Dale turned out a strong side missing Chris Hodgkinson and Ross Hartley but welcoming back young Zac Baker and new player Ayrton Campbell along with Travis Townsend on the wing. A good start by Dale saw them forcing a penalty on half way a good line out take by Eddie Shanks the feed out to full back Josh Schofield saw him beat one defender then being bundled into touch. Glossop had their own attacks mostly engineered by their experienced fly half Liam McGovern with deep kicks the order of the day. With 15 minutes gone a good passing move with Matt Johnston and Danny Joesbury at its heart saw Ollie Coldman draw the defence and slip the ball to Schofield who side stepped the last two defenders and score in the corner ably converted from the touchline by Coldman 7-0.This served to have the home side re-double their efforts and having won a penalty on half way a high kick went deep into the Dale 22 where Travis Townsend took a great catch under pressure and called the mark.

A series of penalties had Glossop camped in the Dale half but great tackling from Harry Hayes and Eddie Bateman held the big Glossop No. 4 on the 10metre line and a huge hit from Shanks dislodged the ball for a turn over Coldman and Townsend moved the ball out to the right wing for the diminutive Zac Baker to out strip his opposite number and score, the conversion going wide 12-0 on the half hour. In a rare mistake the Glossop fly half lost the ball on his own 22 and Harry Hayes was there to hack through, the ball skidded over the line and the full back was forced to touch down, from the drop out Schofield flew at the Glossop defence and passed out to Coldman who then had a two man overlap with the line in sight and the full back committed the pass to Pat Gillan steaming in from centre looked good and a third try guaranteed but the referee judged the pass forward so no try. Glossop were next on the score sheet after a good run by the full back they had numbers on the left wing and an inside pass saw their centre go over for a converted try 7-12. With half time approaching both sides had chances but it was Dale who finished better with good breaks by Hayes and Foster leading to a nice pass inside to Schofield in a replica of his 1st try as he crossed in the corner, This time Coldmans kick went well wide so half time saw Dale 7-17 up and looking good for their lead.

The second half was only minutes old when Joesbury took a kick on half way and gave a long pass to Baker who outstripped the Glossop defence to score a solo try the kick went wide 7-22 and Dale cruising or so it seemed. Several penalties went against the visiting side whilst defending their own line and on the attack in a bizarre incident Baker was penalized when going for a punt through by Johnston while he was being tackled without the ball which caused coach Danny Collins running the line to have a waving fit which did not endear him to the referee. Within minutes two Dale players Kyle Parry who had played a lead role in defence being yellow carded for a trip tackle and Fly half Johnston for a high shot were off the pitch and Dale were down to 13 men for the last 10 minutes, despite heroic defence and introduction of debutant Ayrton Campbell to strengthen the pack Glossop made the numbers count and broke through to score a converted try to make it 14-22 with 5 minutes to go.

The frantic efforts by both sides led to yet more penalties and warnings by the referee and eventually a good clearance by Colman was taken by Glossop No.10 McGovern who placed a high Crossfield kick almost into arms of their winger who scored in the corner his only failed conversion left the score 19-22. With re-start contested just beyond half way Dale were awarded a scrum which Joesbury secured and launched the ball into touch with the final whistle blowing.

This maximum points win saw Dale retain 2nd position in the league in a hard fought contest against a good Glossop side with Danny Joesbury, Schofield and Baker the pick of performers in an all round Dale team effort. Next week Dale are away to Winnington Park with the coach leaving at 11.15.