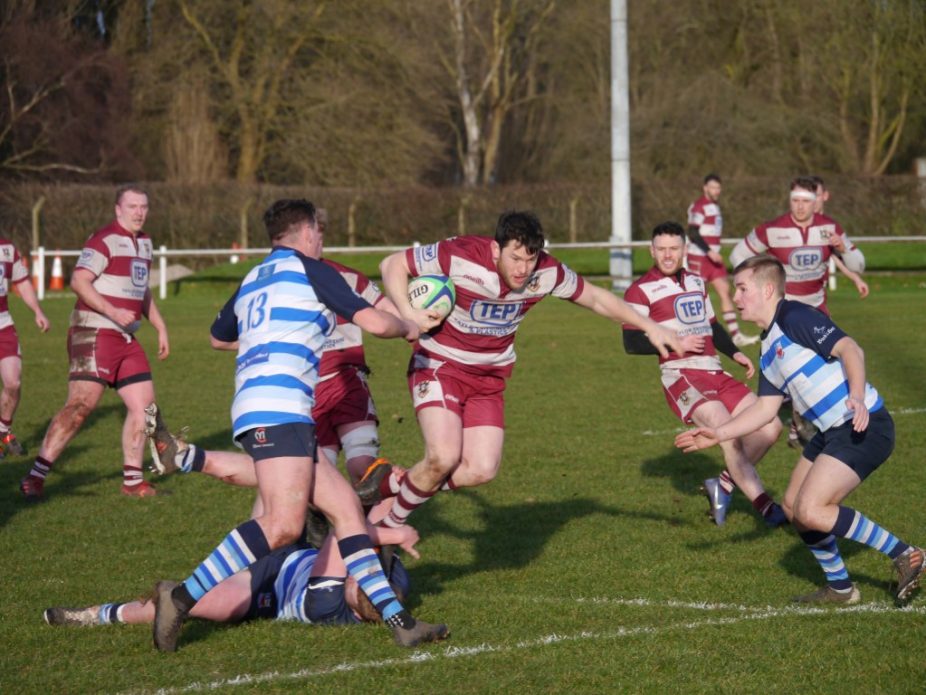 Despite heavy overnight rain the pitch was in good condition at Winnington Park, Dale arrived on the back of a good win last week at Glossop looking to maintain their 2nd position in the league. The hosts have had a poor season by their standards but recently have had good wins and could not be taken lightly. Harry Hill failed a late fitness test and was replaced in the front row by newcomer Ayrton Campbell.

Good pressure by the Dale pack led to a penalty in front of the posts on the Winnington Park 22. Matt Johnston took the kick but it drifted wide so a good early chance went begging.

Winnington took the chance to get into the game with good drives and slick passing moves testing the visitors defence, eventually Dale were penalized in kickable position and the fly half made no mistake  3-0 after 10 minutes. The home side had their tails up and good kicks pinned Dale back in their own half, a line out on the 22 Park put a good passing move together and scored a converted try 10-0 on the half hour.

So far Dale had made little progress and despite good runs by Danny Joesbury, Ollie Coldman and Josh Schofield no real scoring chances came their way, in fact it was Winnington who had the next chance to score with a penalty in front of Dale’s posts which they dispatched with ease 13-0. The visitors needed to get back in the game Johnston and Joesbury did their best and the pack with Jake Castree and Harry Hayes worked hard, a penalty came and the line out on the Park 10 metre line was well taken by Eddie Shanks and fed out to Schofield who produced one of his weaving runs to beat the defence and go over in the corner, the kick again went wide so 13-5 with half time approaching. Dale were now getting into their groove and another try looked on the cards but the last pass went into touch so half time saw the score 13-5.

The second half had Dale pressing hard and making good breaks without seeing a score for their efforts. Bateman, Hayes and Campbell all had chances but the Park  defence held firm and deep kicks from the very efficient Park fly half Ben Elliot kept Dale in their own half, a ruck on half way led to wing forward Hayes being yellow carded for querying the refs decision, so down to 14 men Dale had it all to do when a penalty came to Johnston just inside the Park half he chose to break his duck but the kick fell short. It fell to Joesbury to make the  move that led to a Dale breakthrough after Coldman had burst through the Park defence, he passed out to Travis Townsend who found Danny Joesbury in support he ran through to score again the kick this time by Coldman fell short 13-10.

The last quarter was all Dale with Brad Fox coming on and the return of Hayes after his carding, Ayrton Cambell had a couple runs and Kyle Parry and Jonny Bradley battered their way through setting up chances for the hungry backs this led to a series of penalties which took Dale into the red zone but try as they may the line seemed unbreakable until a crash over by Castree was disallowed as not grounded. This caused Dale to redouble their efforts and they were camped on the Winnington line when a free kick was dropped into touch. On came James O’Connell and Oliver Wood for a last effort the line out ball was taken by hard working Andy Foster and the feed was taken by O’Connell closing on the line Schofield jinked in at the corner contested by the home defence but the try was given again the conversion missed so the final score was 13-15 to Dale.

Winnington Park may have felt hard done by but Dale’s never say die attitude despite 15 points going adrift and being a man down at a crucial point in the game saw them through to another last minute win and a secured 2nd place position. With next week’s home game against Vale of Lune giving Dale the chance for revenge for the early season loss starting at 2-15.

Just a mention to Rochdale Colts who have four players ,Garrett Myers, Ollie Mills , Tom Hesketh and Ben Haigh have been selected for the North of England under 18’s squad a great testament to the coaching and Colts set up at our club.