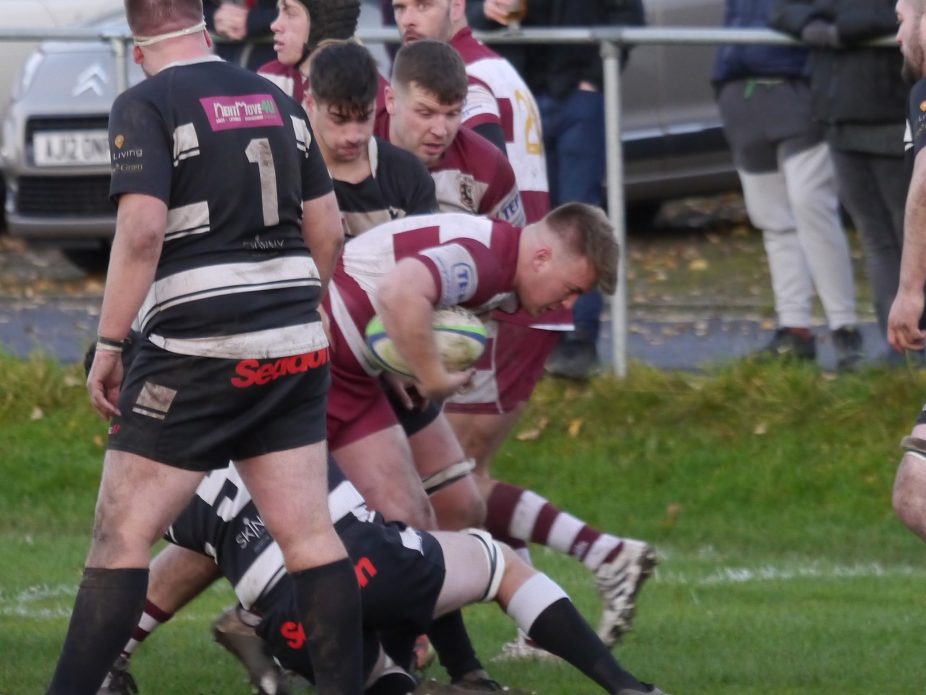 Following on from last weeks great win at Birkenhead Park Dale welcomed Broughton Park who they had lost to on the opening day of the season by the smallest of margins determined to take revenge. Missing influential scrum half Danny Joesbury coach Danny Collins turned young 2nd team scrum half Zac Baker to fill the gap having made two appearances for the firsts on the wing. Dale were soon on the attack and a chip through the Broughton defence by Ollie Coldman was followed up well and hacked through for Hooker Kyle Parry to score in the corner the conversion fell just short so 5-0. The next score came quickly as the kick off was well collected by Eddie Shanks and passed to Matt Johnston who placed a nice kick over the visitors defence for Pat Gillan to speed through and score, again the wind held back the conversion, 10-0 with ten minutes gone.

Broughton Park had plenty of ball and pressed the Dale defence but again superb tackling by Ross Hartley, Harry Hill and Jonny Bradley held them at bay. Dale had a penalty on their own 22 and following the line out Coldman had a huge kick well taken by the visitors full back the passing move that followed saw them just short of the Dale 22 when the referee awarded Park a penalty which was well converted 10-3. Both sides had chances but a series of dropped passes and knock ons. Left the half time score 10-3 and all to play for in the 2nd half.

From the kick off a great take by Jake Castree saw him held up on half way a deep kick to the Park 22 was taken by the fly half but Coldman following up made a crunching tackle and as the ball ran lose it was the Rochdale centre who was quickest to react and hack the ball over the line and score, he then converted to make it 17-3. Broughton Park kept in the game and when Dale were penalized on their own 22 a good kick found touch in the corner and from the line out a nice passing move found the left winger in space to score 17-8.

At this stage Dale lost Jack Green to a leg injury and Harry Hayes came on for his usual 2nd half run this had the effect of shoring up the defence and giving Dale another attacking option. Dale had a line out on the Park 22 and even though the ball was lost the visitors managed the lose the ball forward the impressive Dale scrum saw Castree break from the base and lay on a pass for Zac Baker to find Pat Gillan streaking through on the wing for his 2nd try of the day 22-8.

With the bonus points secured Dale piled on the pressure and another clean take by Shanks from the re-start was passed to Johnston who hoisted a high kick into the Park half the return effort only made the 22 and from the line out Dale mounted an impressive drive that saw them score a 5th try converted by Coldman 29-8. From the kick off Dale lost the ball on half way but Broughton Park were penalized for a knock on in the line out, the scrum was well won and a good passing move with Baker, Johnston and Hayes involved saw the final chip over the defence touched down behind his own try line by the full back the drop out made the 22 and only another knock on by Dale gave a scrum to the visitors, the box kick was well taken by Shanks and a with the ball moving smoothly to the left wing Si Moore took the final pass and scythed through the defence for a fine solo try, Coldman made a difficult conversion look easy from the touchline 36-8. It was all one way traffic now as Dale turned on the class and a ragged Park defence began to buckle under fast passing and good drives by Shanks and Castree with Schofield held on the line the ball came back to fly half Matt Johnston to score a well deserved final try 41-8. A fine result which took Dale to 4th in the league next week is the International as Dale take on Douglas Isle of Man with good travelling support guaranteed.
David Rhodes R.R.U.F.C.