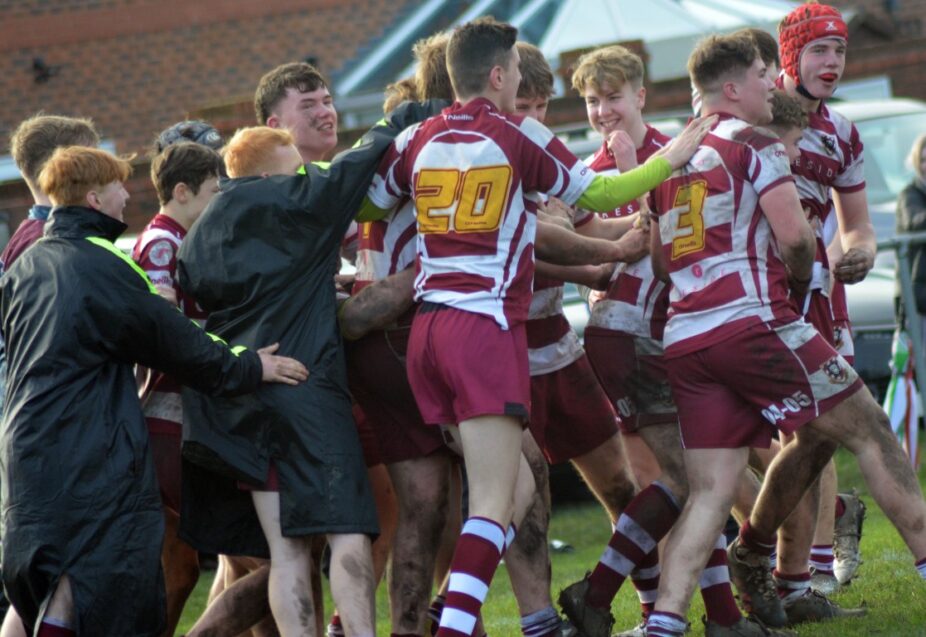 The long-awaited Lancashire cup Semi-final between Rochdale and Heaton Moor took place at Green Lane, Heaton Moor on Sunday the 16th. Moor are a much-improved team and have won nearly all their matches this season. Rochdale are also having a good season but are well aware that cup rugby is a completely different animal and teams give everything in a winner takes all shoot out.

Rochdale started strongly but Moor’s defence was well drilled and, despite numerous exchanges close to the home team’s line, Rochdale were unable to breach the defence. Moor’s lineout was also functioning well, taking their own ball and stealing some of the Rochdale throws. This gave the home team field position and from their first visit to the Rochdale 22 they secured 3 points from a penalty close to the post (0-3).

Rochdale’s response was emphatic. After a blistering break by Zac Baker split the home defence, further carries took the ball close to the Moor line. Quick ball followed and a pinpoint crossfield kick was expertly taken by Ben Kershaw on the right wing who touched down in the corner (5-3). Rochdale should have pressed home their advantage but a series of unnecessary penalties allowed Moor another shot at goal which they gratefully converted (5-6), concluding the scoring for the first half and giving Rochdale plenty of work to do in the second.

The half time team talk was about getting back to basics and it appeared to be taken on board as, straight from kick off, Rochdale secured possession and moved down field. After a strong carry by Declan O’Loughlin the ball was recycled and Mitch Holt bolted through the gap before releasing Tom Shaw who powered over. Shaw knocked over the conversion from close to the touchline to extend Rochdale’s lead (12-6). This settled the away team’s nerves and they began to play with fluidity. From a scrum 10m from their own try line, the Rochdale backs ran a miss-move that got the ball to Tom Hesketh on the left wing. He easily outpaced the defence and swerved and then accelerated around the Moor fullback to score a length of the field try close to the posts (19-6).

To their credit Moor were still competing in all facets of the game but they were unable to breach the Rochdale defence with the Rochdale 10,12 and 13 channels impregnable. Rochdale soon got back on the attack returning a clearance kick into the Moor 22, quick ball allowed a blind-side break by Hesketh that came up just short. From the subsequent ruck Garrett Myers powered through a couple of tackles to score (26-6). Rochdale were controlling the game now and completed the scoring when, from a scrum 25 meters from the Moor line, Baker broke blind and got to the outside before straightening and outpacing the defence to score (31-6).

Defences were on top in the first half but Rochdale upped the tempo and played a more expansive game in the second which paid dividends. Some excellent performances after a cagey opening half. Baker provided the spark from scrum half to ignite the offence. Jacob Jackson and O’Loughlin made the hard yards up front. MoTM went to Tom Shaw who was part of a solid defensive effort, showed pace and skill in attack and his kicking was at the highest level. Rochdale will now play Preston Grasshoppers in the Lancashire Cup Final on Sunday 24th April.