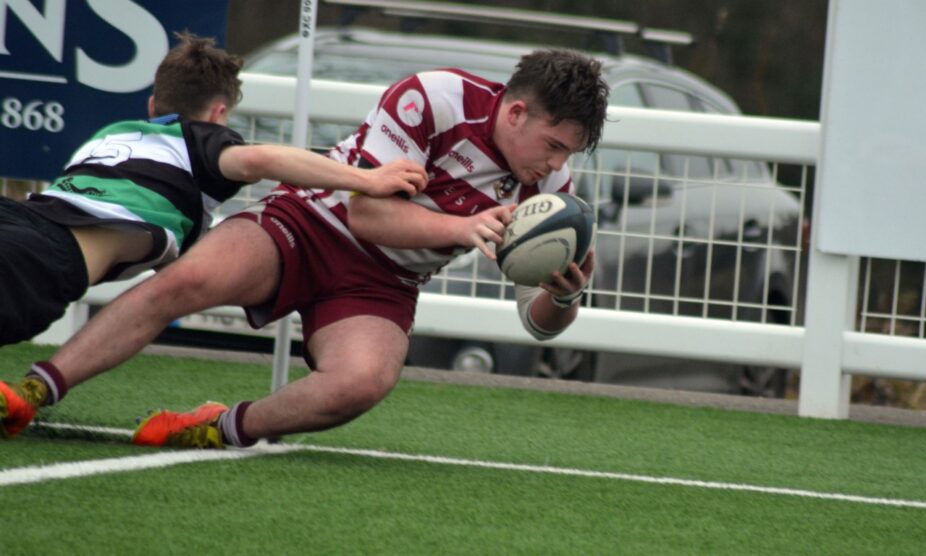 After Rochdale secured a place in the Lancashire Cup Final last weekend, there was no respite as they travelled to Lymm for a League fixture. Lymm are presently at top of the League with Rochdale second, so this was another must-win game.

Lymm have a reputation for fast, open rugby built on off-loading from the tackle and some serious speed in their back line. Rochdale started the match strongly, using their ball carriers to get over the gain line and then going wide to stretch the defence. After a couple of close calls, Rochdale got on the scoresheet from a tap penalty 10m out from the home side’s try line. Ben Sunderland danced through a couple of tackles before offloading to Nick Wright who found Mitch Holt running a hard line and bursting through the defence to score (0-5). However, Lymm hit back almost immediately when, after some good handling and offloading out of the tackle, the fullback found the outside and raced 50m to the line (5-5).

Both teams were trying to impose their style on their opponents; Rochdale building from set pieces and direct carries from their forwards before releasing their backline and Lymm going for the fast and loose off-loading, trying to put their speedsters through gaps. Eventually Rochdale began to dominate territory and, after a prolonged period of attack, a blindside break from Holt found Garrett Myers who powered down the wing and crossed the line next to the corner flag (5-10) concluding the scoring for the half.

Rochdale had lost a couple of forwards to injuries in the first half and, with no like-for-like replacements, drafted in a wing and centre to their forward pack and leaving themselves with no further replacements for the rest of the game. Lymm had replaced five players during the break and, almost immediately, the fresh legs had an impact and Lymm scored after a series of close drives for the line (12-10).

The game was end to end now and it was Rochdale’s time to shine. From close to the Lymm line, several drives were rebuffed but served to narrow the home side’s defence. Spotting the overlap, the ball was moved quickly along the Rochdale back line where Tom Shaw received the scoring pass and dotted down for a 7 pointer (12-17).

Games can be won and lost on small moments and, from a scrum the result of a short restart kick, Rochdale struck. A stray pass found the Rochdale fullback, Ollie Simpson, who fixed the winger and passed to put Tom Hesketh clear. He in turn beat the first cover tackler and then stepped a desperate lunge from the Lymm fullback before accelerating away from everyone to score under the post (12-24).

This provoked a reaction from Lymm and they redoubled their efforts, running the ball from everywhere and at every opportunity. Rochdale were holding them out and got the slice of luck their endeavours deserved when a crossing penalty in the Lymm 22 allowed Holt to extend the lead to 15 points (12-27).

Lymm replaced another batch of players and further upped the tempo. With all their replacements on, Rochdale were beginning to tire and spaces were opening up for the Lymm attackers. It was now a case of when, not if, Lymm would score and for Rochdale it was an out and out defensive effort which saw numerous last-ditch tackles. Lymm needed three scores to overhaul Rochdale and they secured the first with six minutes remaining (19-27). Rochdale were doing all they could to manage the clock and see out time but conceded again with two minutes left (26-27). There was time for one last Lymm attack and they got within 5m of the Rochdale goal line before a turnover secured possession for Rochdale and they were able to clear to touch and end the match.

It was a terrific game between two evenly matched sides displaying great skill and playing at a break-neck pace. Lots of standout performances; special mention to Will Rawlinson, Will Simmons and Gabe Fraser who played out of position in the forwards and all put in some fierce tackles in the defensive effort. Myers, Alex Barry and Jacob Jackson were outstanding in attack and defence. Joel Rigby played the full 70 minutes grafting in the front row. Behind the scrum, Zac Baker, Holt, Ben Kershaw, Max Cooper, Simpson, Hesketh and Shaw all contributed to a stonewall defensive effort. Both Nick Wright and Declan O’Loughlin had to leave the field due to injury but are on the mend. MoTM went to Sunderland who was a constant nuisance to the opposition at the breakdown, slowing down and turning over ball, strong in the carry and tackle and available as a link between the forwards and backs.