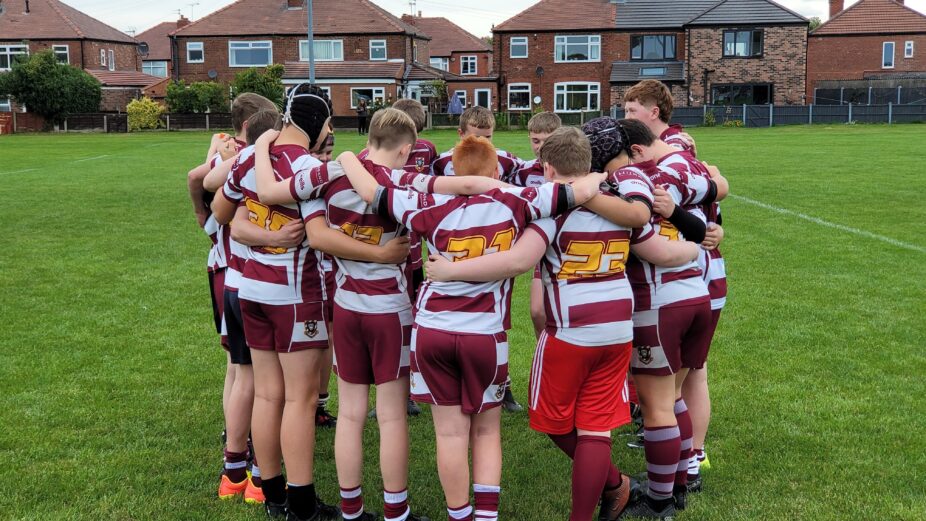 A hectic morning with loads of diversions to get us to Leigh! We (Jethro, Max and I) arrived just in time for the start of the game. Quick warm up and then the kick off.

The forwards must have been paying attention the past few weeks, as they with great gusto dismantled Leighs defence. Their rucking was superb and although it came as a pleasant surprise to me, it seemed to surprise Leigh much more. This strong platform allowed our boys to dominate on all fronts, as they attacked the defence relentlessly allowing us to score the first try. Leigh, as if awaking from a slumber, gallantly clawed their way back to equalise.

Rochdale, not content with one try worked hard to push the score back in their favour. It would go back and forth with Rochdale leading most of the game, until the score was levelled at 4 all. It is hard to mention every good deed accomplished to bring our boys to that point in time.

Our try scorers were, Adam, Oli x2 and Ben Leaver! All scintillating and textbook tries with loads of support play and all the things that make us as coaches and supporters proud. Special mention to Ben, who for a relative novice is paving his way to glory.

It was in the latter part of the game that Leigh would get the opportunities to undo the good work our boys had achieved. From my perspective, a mixed bag of contributing factors caused this to happen. Our forwards (who played a great game) grew tired (physically) from ongoing relentless attacks and defence. Likewise, the backs over time allowed themselves to be sucked in and not keep the line. Our backs reluctance to enter rucks to retain ball at breakdowns, rather than waiting for the cavalry, caused us to lose possession regularly, something that needs urgent attention!

And as one parent so aptly proclaimed, you are one team not two (forwards and backs). This is my stated mission, to fashion a sword that will accomplish just that!