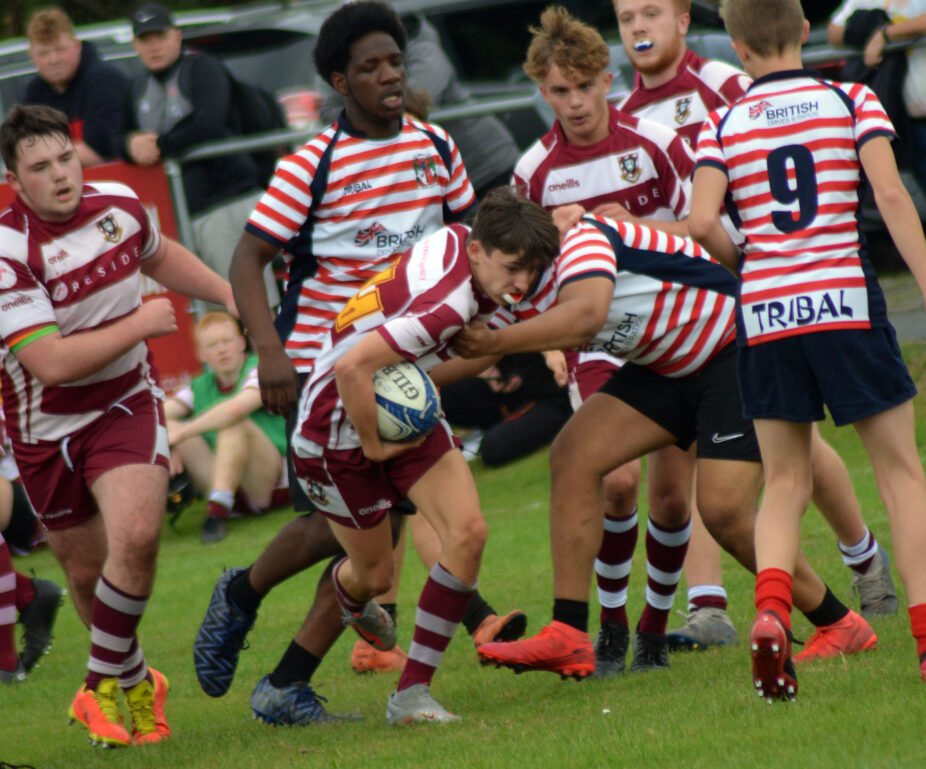 Sunday saw Rochdale entertain Aldwinians in the first round of the Lancashire cup. Both teams are at the top of their respective leagues although, as Rochdale are a couple of levels higher, the expectation was that Rochdale would be the stronger team. That said, Aldwinians regathered the kick off and were immediately on the attack. Rochdale’s defence has been miserly so far this season and they repelled the early onslaught. Once Rochdale regained possession, they were able to move the ball swiftly through hands and progress down the pitch. The Rochdale ball carriers were making good inroads into the Aldwinians defence and the backs were moving the ball wide at every opportunity. From one attack close to the line, Olly Mills was on hand to cut back through the defence and find the line (5-0).

Aldwinians were finding it hard to retain possession and the Rochdale set pieces were proving dominant. Ben Hankinson has become a real asset in the lineout and the pack had the opposition in retreat at every scrum. From a kicked return, Rochdale engineered two quick rucks, fast ball ensued and was moved wide for Ben Kershaw to finish off (10-0). All the momentum was with Rochdale and they were working hard with and without the ball. After pressurising Aldwinians defence, Ollie Simpson gathered the loose ball and ran in unopposed (15-0).

Rochdale’s pressure was now incessant and forced Aldwinians to ground the ball behind their own line. With the new laws this is now a drop-out from under their own sticks. The resultant drop-out sailed directly into touch giving Rochdale a 5-metre scrum. When the ball bobbled out Will Rawlinson was first to react, gathering the ball and powering through two tackles and over the line (22-0). Rochdale scored again just before half time when the ball was quickly moved wide and Will Simmons crossed in the corner taking the score to 29-0.

The interval didn’t interrupt Rochdale’s momentum. Straight from the restart, Simpson gathered the ball, beat the first defender and reached the outside, outpacing the cover before the inside pass found Ben Kershaw who delivered the scoring pass to Jacob Jackson (36-0). Aldwinians couldn’t keep Rochdale out of their 22 and, from another well executed lineout, the ball was driven blind before returning in-field where Ben Sunderland ran between two defenders to score (41-0). The Aldwinian restart didn’t go the full 10 metres giving Rochdale an excellent attacking scrum. Rawlinson fed Zac Baker whose flat pass put Simmons through the gap and he raced 50 metres to score between the uprights (48-0).

Again from the restart the ball didn’t travel 10 meters, but this time Rochdale played the ball and Jackson fed Sunderland whose arching run cut between two defenders and he sprinted away to conclude the scoring (55-0).

Aldwinians stuck to their task for the entire game but they came up against an in-form Rochdale who were fairly ruthless and didn’t let their intensity fade. There were some excellent individual performances in amongst a fine team display. MOTM went to Simmons but it was a close call with Jackson also excelling. Rochdale progress in to the last eight where the opposition will be a lot stiffer