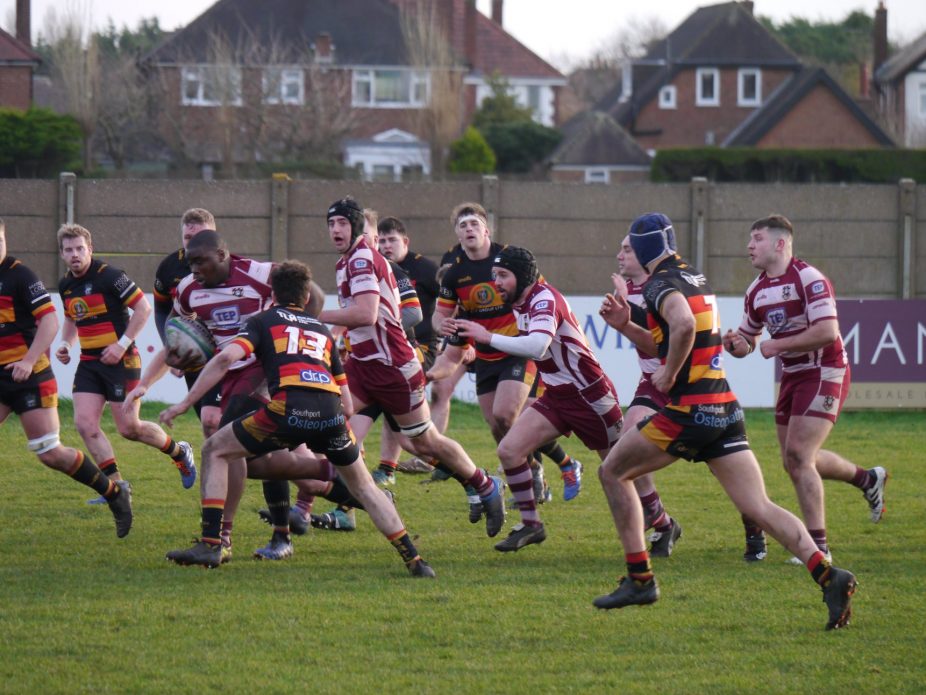 Despite having their Talisman Sean Needham missing and with three other forwards on the injury list Rochdale welcomed back young prop Beltus Nonleh he started on the bench. On a bright sunny afternoon all looked set for a great game of rugby with Dale needing to carry on with winning ways, however it was the home side who made all the early running. A high cross field kick by Southport fly half Charlie Attis caused panic in the Dale defence and after being held on the 5 metre line Southport broke through to score the conversion was missed 5-0. A promising attack by Southport looked to have been stopped by a great tackle by Nick Ahearn only for the ball to be re-cycled to Attis how fired a high kick across field to give a five man overlap against the stranded Dale defence for the winger to go in this time the extras were added 12-0.

A good break by ‘Spud’ Green was stopped on the Southport 5 metre line and the game swung back to the home side who got to the Dale 22 despite good tackles from Chris Hodgkinson and Tom Hindle the referee gave a penalty for offside and up stepped Attis to slot home 15-0 on the half hour. Try as they might Dale could not penetrate the home defence then a glimmer of light when on 35 minutes they were awarded a kickable penalty 30 metres out but Ahearn saw his effort drift just wide. Southport needed no encouraging to go back on the attack and scored a try under the posts converted by Attis 22-0. Things were looking serious for Dale when young prop Ben Coulter led the charge to score Dale’s first try sadly the conversion was short 22-5.

With half time looming the home side mounted yet another sweeping move and scored their 4th try which was converted so 29-5 was the half time score.

Coach Danny Collins brought on Beltus Nonleh and from the kick off he made his presence felt with the Southport defence unable to stop his strong runs supported by Hodgkinson and Harry Hayes, with 5 minutes gone in the 2nd half it was Nonleh who crashed over with James Duffy converting 29-12.

Dale’s luck seemed to have turned when the ref yellow carded the Southport 2nd row for a high tackle on Travis Townsend who had been working tirelessly to get Dale back in the game, a good touch kick saw Dale on the home side’s 22 and up popped Ahearn to score a fine try which he converted 29 -19. With 5 minutes to go Southport were back on the attack and won o scrum on the Dale 22 in front of the posts and the ball was laid back to the ever present fly half Attis to slot a nice drop goal and extend Southport ‘s lead to 32-19. All the action switched to the home side’s half with Nonleh charging through the ball was released to the left wing and what looked like a certain scoring chance but the ball was chipped over towards the posts with no one from the Dale side there to finish….. Southport breathed a sigh of relief, but within minutes Townsend had manufactured a great move with Green and went in for a well deserved try.

With the kick missed the final score was 32-24. Dale almost came back from a woeful first half but left it just too late to save the points. With the other two sides at the top winning the slip back to third in the table .
Cup action next week when Dale travel to Vale of Lune in the Lancs. Cup.
David Rhodes R.R.U.F.C.