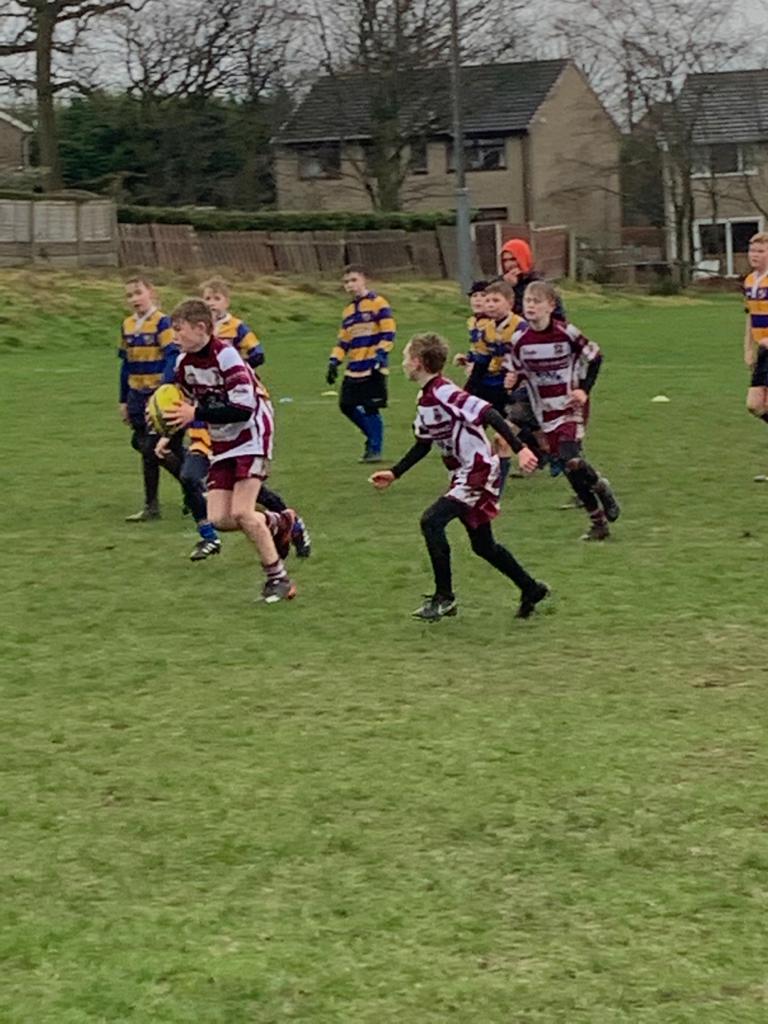 There was a biting breeze and plenty of rain and hail in the air as we gathered at Holden Road for a meeting against a Burnley team we had bested earlier in the season, but who now had home advantage.

With Noah in charge of the squad, and with 2x 20 minute sessions to be had, Burnley kicked towards us, and the weather conditions immediately made themselves apparent – a slippy ball was spilled by Adam, and we had our first scrum. With George Booth (Boothy) playing as hooker, swift feet secured a win against the head and the ball emerged on our side. Jonty passed out to Alfie who jinked his way through 2 defenders, breaking a tackle and the Burnley defensive line to sprint over and make it 1-0.

Our team had definitely adapted better to the conditions and our pressure was relentless. Kian and Isaac were putting in great work in the rucks and mauls, and with Noah delivering a masterclass in sidestepping, the tireless trio of Adam, George C and Damian in the middle of the field left the Burnley defense in tatters for Noah to finish the move and go over in style, 2-0. With 5 minutes left, and Burnley starting to recycle more fluidly, Adam showed brilliant anticipation to intercept the ball from a loose pass, and ran nearly half the pitch to finish the half. 3-0.

At the half time team talk, Noah commented he’d never seen the team play as a unit so well, and it was hard to disagree. The 2nd half got underway and the conditions hadnt really improved. Michael was suffering from windchill with Bailey and Louie heading on to provide some fresh legs. Burnley were straight out the traps, and launched a blistering attack. George, Adam and Alfie were all tackling like demons when Burnley finally managed a break round the outside – Noah put in a great effort to try and wrap up the player as he crossed the tryline, but the score was awarded 3-1.

From the restart Adam and Alfie put in another cracking disruptive play and with Alex, Isaac and Jonty engaging their forwards we used the line to great effect, Boothy and George C running straight, pass to Noah to wrap up another 2 and then a great offload to Oliver who had been having a cracking and determined game on the wing .. he flew round the outside of the line, shrugged off the attempted tackle and scored to make it 4-1.

Burnley kept the pressure up and almost scored an immediate response, only a remarkable try saving tackle from George C keeping them out. But as we were considering attacking options from the scrum awarded, Burnley won it off us, and made no mistake to score themselves 4-2. The scoreboard kept ticking .. Damian was proving a real handful in the breakdown, and Alex did well to secure loose ball and manage a drive of his own. But when Boothy and Jonty conspired to recycle a turnover, Adam sliced the Burnley defense open, and with the try line right in front of him, he selflessly passed to George C to record the try, a really lovely teamwork touch! 5-2.

Burnley weren’t finished yet, and with a few subs thrown on they camped near our try line. Louis wasn’t being given much space to work with, and Bailey had responded well to the conditions, contributing well in the rucks and mauls and supplementing the strong counter rucks Isaac, Damian and Kian were putting in. However Burnley finally made it over to pull it back to 5-3. And with the match nearly done, another try saving tackle from Alfie wasn’t enough to stop a final score from the hosts and finish 5-4.

The scoreline flattered Burnley slightly, as our boys had dominated much of the game, with a team fluency and proper effort put in by each and every player. Straighter running is something to work on, but the camaraderie and combined skills of all the players was more than enough to thaw us spectators! A very enjoyable mornings work.

CAPTAINS REPORT: NOAH WILDE
I was asked to captain Rochdale for our game against Burnley, not having played with this team before I was unsure how we would work together. From the start I was impressed with everybody, they were working as a team. We were tackling strongly and working hard at the breakdown, passing the ball down the line and with a lot of communication between us. WE WERE NOT GIVING UP THE FIGHT!

The try that stood out to me was when the forwards were crashing the ball in hard, then in a split second the ball was passed through most of the backs hands and reached its destination on the wing. The final score was 5 – 4 to Rochdale, we all gave 100% and definitely deserved the win. I was very proud of everybody and was honoured to captain the team.