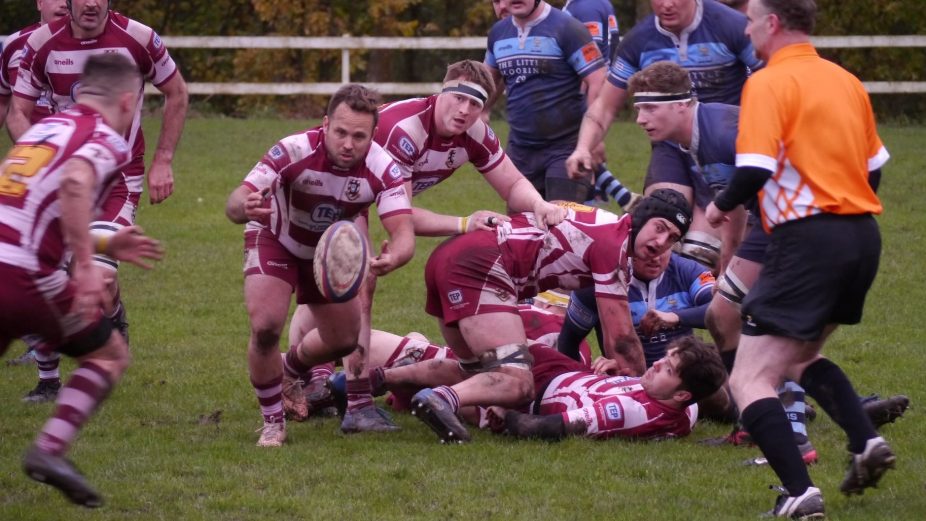 Dale secured all 5 points and first place in the Division with a very professional performance at a windy Aspull ground.

Danny Collins was able with the exception of Sean Needham and Tom Hindle to name his strongest side for his tricky away match against a side promoted twice in the last three years who play some nice rugby and who have a reputation as a hard team to beat at home.

After an initial scare of two penalties to the home side in the first 5 mins Dale settled and had a free kick of their own reach the visitors 22. It was the combination of two potential country and western singers Travis Townsend and Jackson Kelly who broke the deadlock with a high pass from the scrum half finding the young winger in space and his pace did the rest scoring under the posts, Nick Ahearn made no mistake adding the extras 7-0 after 10 mins.

Five minutes later it was Spud Green bursting through the tail end of a line out on the Aspull 22 and scoring to the right of the posts, this time with the wind getting up Ahearn just pulled the conversion wide. 12-0 with 15 minutes gone.

Dale now started to get on the wrong side of a penalty count that grew through the game and after a good kick to touch by the home side they won a scrum on the Dale 5 metre line and took the chance well to score in the left corner the kick  going well wide so 12-5 after 22 mins.

The Dale pack even without Talisman Needham did well with Tom Helliwell and Chris Hodgkinson driving the ball forward and after a couple of rare penalties for the visitors, it was Hodgkinson who got over the try line for a converted score 19-5 after 30 mins.

Minutes later a similar scrum on 10 metres saw hard working Rod Wadsworth crash over,  the kick from Ahearn just wide 24-5 with half time approaching. Both sides had chances before half time but great tackling by Ross Hartley and Harry Hayes held the Aspull attack. Half time 24-5.

The new half saw Aspull  defending on their own 22 but ill discipline caused a penalty and a comment to the referee sent Dale back a further 10 yards. The break in play was used by coach Danny Collins to make several subs. On came Slamon, Kyle Parry and Adie Gleeson [48 mins] They soon won a  scrum on half way and after a good break by Ollie Coldman  had the defenders penalized on their own 5 metre line Townsend fed Ahearn from the base of the scrum but jinking through the defence he went for glory when an inside pass would have let in James Duffy on his return to score instead the number 10 was stopped just short of the line and a chance to seal the win passed by.

With Aspull back on the attack Dale had to defend hard and soon after Tom Helliwell was replaced by the returning Foster it was full back Coldman who fell foul of the referee who seemed to be penalizing Dale’s defence at every breakdown and he was shown the yellow card for going offside.

The next changes saw Harry Hill and Harry Hayes replace Tom Callaghan and Rob Wadsworth who had both played their socks off and got a good round of applause from the visiting fans.

Mention here of Stanley Collins the coaches’ 3 year old son who kept the crowd entertained diving and sliding in the touchline mud egged on by the spectators but much to the annoyance of his Dad … a star of the future that one!

Dale defending their 5 metre line gave away a series of penalties and Aspull managed a conciliation try with 5 mins left 24-12.

Oliie Coldman came back from the bin and made an impression teaming up with Townsend and Ahearn to create a large hole in the home defence, up popped sub. hooker Kyle Parry for a rare but well deserved try, Ahearn slotted the extras making the final score 31-12. A  good win at a difficult opponent but the result cemented top place for another week. Next Saturday the visitors to Moorgate Avenue are Bolton for a 2-15 kick off.