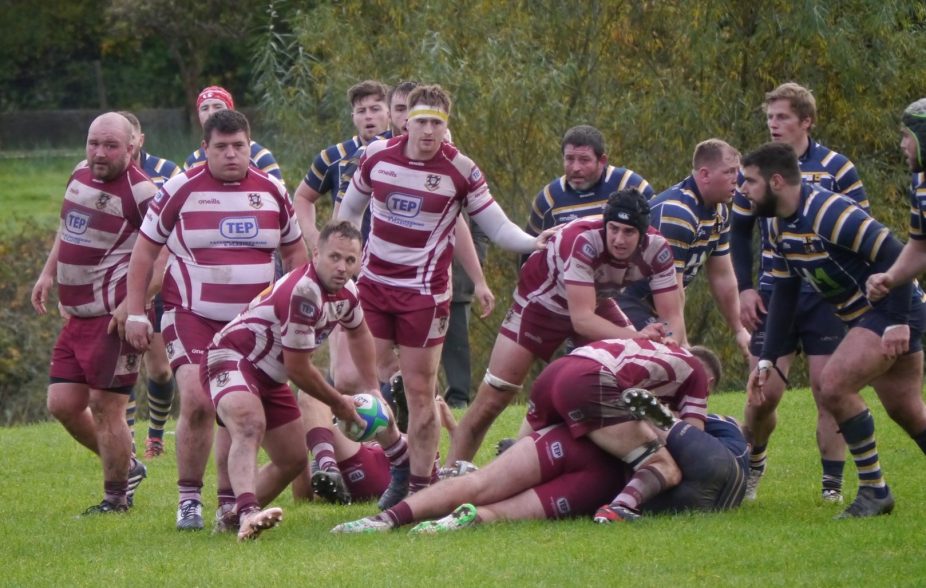 After a very wet week at Moorgate Avenue the referee decided that the first team pitch was unplayable so the game moved to the Hill pitch normally the domain of the 2nd XV.

Danny Collins was able to field a largely unchanged team from the one that won last week at Aspatria.

Chris Hodgkinson playing at wing forward and Josh Boardman in the centre. The visitors from the Wirral were relegated last season but have made a good start this year and would be strong opposition. The game started as the weather cleared and in  the first minutes a wild cross field pass was spotted by Rochdale fly half Nick Ahearn on the visitors 22 and a fine interception try opened  the scoring,  Ahearn converted his own try to make it 7-0. The game was fast and furious but after 5 minutes Dale were awarded a penalty on half way Ahearn elected to kick and landed a long range goal bringing his personal tally to 10.

Minutes later with Dale breaking into the Anselmians 22 another penalty,  up stepped Ahearn and slotted neatly 13-0. The visitors began to get some ball and after a penalty had a line out on the Dale 22 but strong jumping by Hodgkinson saw him tip the ball away the referee then gave the home side a scrum and the Dale pack pushed their opposite numbers back and scrum half Townsend tried a long pass to the wing with advantage already called. The ball was lost so Ahearn took his fourth attempt at goal from 30 metres and made it a perfect start 16-0.after 20 minutes.

Sean Needham was at his best and rampaged through the visitors defence but his inside pass to centre Jon Mair fell just short. Dale took a scrum against the head in midfield the pick and drive was stopped on the line but again the referee gave a penalty for offside against the Anselmians defence Ahearn took it from 30 m but this time the ball was pulled wide.

With the visitors back on the attack Dale had some defending to do and were penalized on their 22 the fly half made no mistake 16-3 after 30 minutes. A good re-start saw Anselmians knock the ball into touch on the Dale 22, Ollie Coldman picked the ball up and with one of his jinking runs cut a deep swath into the visitors 22 his short pass was knocked on by Ahearn in support. Dale next threw away a line out on half way and the visitors made their best attack forcing two scrums in the Dale 5m area Andy Donoghue was yellow carded for going offside in what seemed to be his first offence. The penalty was kicked 16-6. Half time came with Dale still defending against a somewhat rejuvenated Anselmians 16-6.

The second half saw Dale on the attack with Blair’Bomber’ Henry taking the ball on half way and going through two tackles until going down on the visitors 22 and turning his ankle in the process he had treatment on the field but coach Collins decided to bring on Jake Green, Dale were pressing the visitors but wasted chances at the line out, they had a good effort by replacement prop Dale Slamon stopped on five metre line Anselmians cleared  the danger and were on the attack in the dale 22 back on Donoghue got into the fray and won a scrum. Ollie Coldman took a nice inside pass from the ever present Townsend but was held back after his grubber kick and the penalty gave a good line out position on the opponents 22. Despite losing the ball Dale won another scrum against the head and Tommy Callaghan crashed over from 5 metres out a classic prop forwards try. Ahearn converted the try to leave the score 23-6.

The visitors piled on the pressure and this time it was Needham who saw yellow for slowing the play down. Great Dale defence on their own line the forward pass by Anselmians sums up their afternoon and Ahearn plants the ball high in a tree, this stopped play for a while. A second penalty took Dale to within 10 metres a great mazy run by scrum half Townsend saw him chip the ball over the defence but was a judged to   have knocked on as he collected it.  A massive clearance kick by the visitors full back saw them in the Dale 22 and a good passing move followed  the prop going over the Dale line for an unconverted try 23-11 after 60 mins.

Dale had to soak up lots of pressure and good tackles by Sub. Harry Hayes and the returning Sean Needham frustrated the visitors forwards,  the two sides traded penalties and finally a high tackle saw the Anselmians 2nd row yellow carded.

With a man down the visitors struggled to contain Dale’s backs and Ollie Coldman produced a fine run from the 22 to jink past his opposite number and score the best try of the day converted by Ahearn 30-11 with 5 mins left. Anselmians kept attacking and were rewarded with a consolation try in the last minute leaving the final score 30-18. Dale were good in all departments but just failed to get the bonus point for the 4 th try which was somewhat disappointing,  however with Glossop’s game cancelled they went to the top of the league for the first time this season. No game next Saturday but the following week Dale travel to Aspull for a 2-15 kick off.