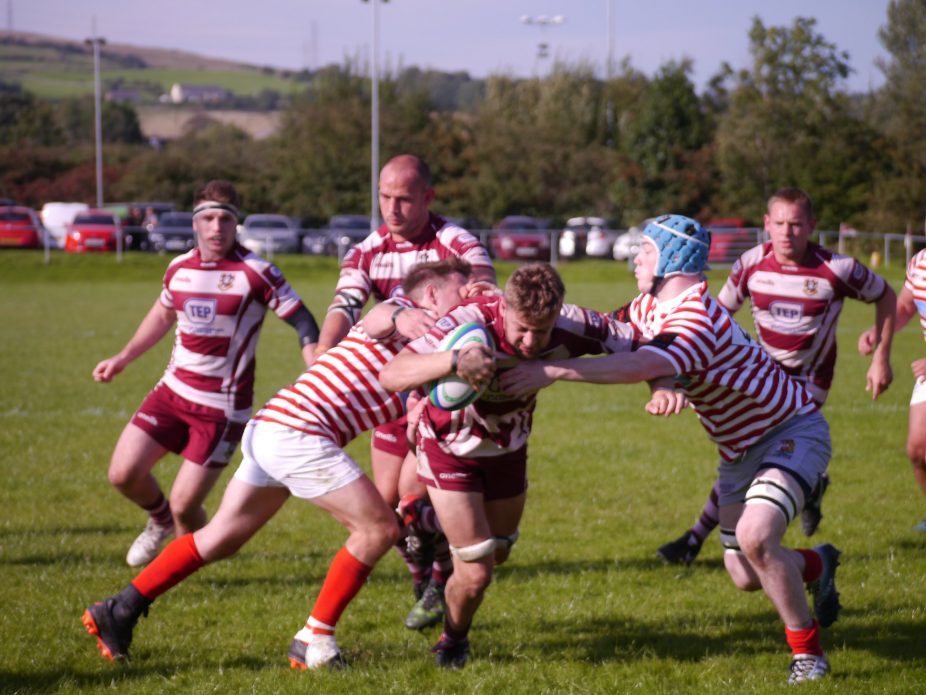 A sunny afternoon at Moorgate Avenue saw the welcome return of two sunny characters to the Rochdale first team the ever smiling and powerful second row  Sean Needham and the speedy South African Travis Townsend finished with his summer cricket commitments on the wing. A strong bench featured Dale Slamon, Chris Hodgkinson and Ross Hartley.

Manchester relegated last season were regrouping after losing some players in the close season but promised to be strong opposition particularly in the pack.

The game started badly for Dale with a yellow card for wing forward Tom Hindle for dangerous play at the break down the referee making it clear he would come down hard on any such play. However it was Dale doing all the attacking after Manchester squandered their line out ball and allowed Dale to break through the centre and a good passing move was stopped by an offside which gave James Duffy a chance to put the home side in front which he converted from 30 metres 3-0.

Manchester bounced back with a break to the Dale 10m line and yet another penalty and an overlong line out throw and slow ball,  sharp tackling by the Dale forwards gave them a penalty for not releasing. The ball moved forward well with Ollie Coldman and Dom Serridge jinking through the visitors defence the pass to James Duffy seemed to have split the defenders but with three men overlapping on the left a bizarre overhead pass by the fly half stopped the move. At the next scrum Prop Harry Hill always in the thick of the action came out with a nasty gash to his head that caused him to go off for treatment.

After yet another penalty to Manchester the referee spoke to both captains and more yellow cards looked a distinct possibility. The visitors seemed happy to keep the play in their pack and won a penalty on half way good counter rucking from Dale saw them break on the Manchester 22 only a forward pass stopped them scoring. They had another chance of points when Duffy had a penalty kick on the 22 but missed badly as half time approached. Another good pack move by the  visitors reached the Dale 10 metre line and only a captains tackle by Serridge stopped the attack. Moments later with the ball at the other end of the pitch Dale appeared to have pushed over for a first try but the ref signalled held up. A second 5 metre scrum to Dale goes over the line only to be ruled out by the Hawk eyed official !

The second half started with another kickable penalty missed and a series of penalties against the visitors but no cards, all the Dale pressure seemed to add up to nothing,  Dale Slamon and Ross Hartley were introduced to bolster the pack the ball cannot seem to get to the backs and with talent like Townsend , Coldman and Macklin waiting for ball that never arrived. However on the 60th minute after more pressure Manchester concede  a scrum on their own 5 metre line and this time Dale crash over for an undisputed try converted by Coldman 10-0.

The flood gates should have opened but it was Manchester realising they had to get on the scoreboard who pressed forward Dale defended well with Hartley and Harry Hayes ripping into the visitor’s backs whenever they had the ball. Manchester got a penalty on the Dale 22 but again their woeful throw went forward another scrum to Dale back to half way but no breakthrough for the home side despite relentless pressure ,as  stoppage after stoppage broke up the game. Manchester had,  a kickable penalty in front of the Dale posts but miss. The clearance kick by Coldman finds touch on half way the ball is well moved by the Manchester backs and finally they score a try much against the run of play near the posts which is easily converted 10-7.

With less than 5 minutes to go Dale take a deep kick off which saw them on the visitor’s 10 metre line the Manchester winger bungled the ball into touch a good throw from Jake Smith was well taken in the line by big Sean Needham who crashed over for a    well-deserved  try which Coldman converted with ease 17-7 was the final score and although Manchester had chances,  the score line could and should have been much more emphatic for Dale.

Next Saturday they travel to Sefton hoping to make it three wins out of three.