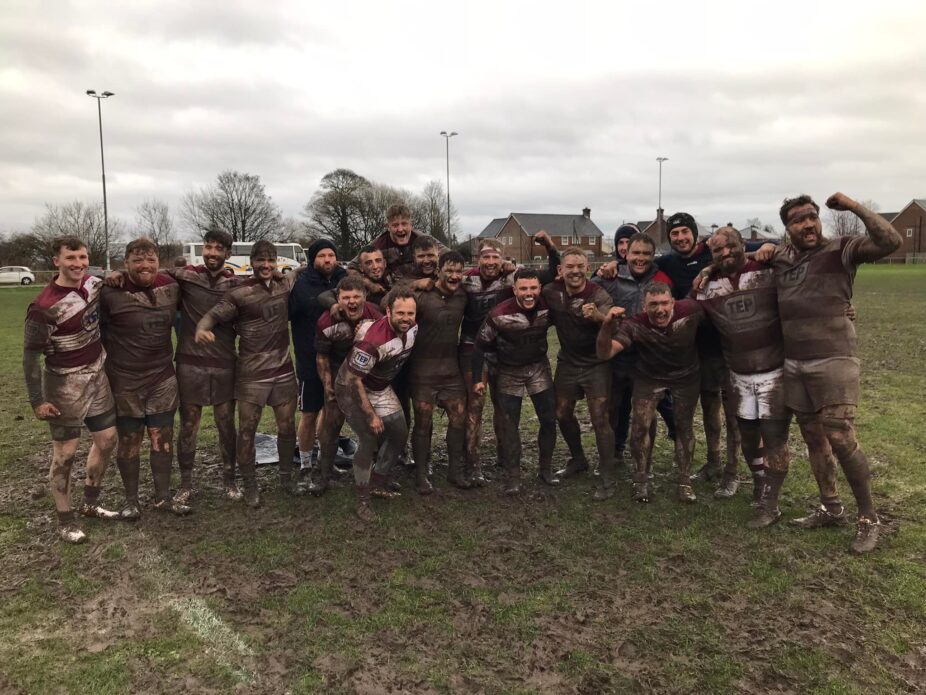 The normally immaculate pitch at Moorgate Avenue was turned into a paddy field by almost constant rain leading to this top of the table clash with Anselmians from the Wirral. The referee decided it was playable much to the relief of all concerned. Dale welcomed back Shaun Needham with Tom Callaghan on the bench, the visitors are used to scoring lots of tries but they met a Dale defence in fine form determined to give them a hard game.

After 20 minutes there was no score, both sides trying to find gaps with high kicks the order of the day and nothing to choose between the two packs. Shaun Needham had a break from a Dale scrum on half way but the final pass wide to Travis Townsend fell short and skidded into touch. Anselmians won a line out on half way and their strong Fijian centre O’Tutaha broke through to feed out and bring the pack into play 5 metres out a penalty was given for off side and then repeated moments later. The ref had warned captain Dom Serridge that a yellow card would be shown and it was flanker Tom Hindle who was the recipient. Down to 14 men Dale hung on and some great defending in the red zone saw them go in at half time at 0-0 a first for the visitors this season.

The 2nd half saw the rain ease off and Dale go on the offensive with Harry Hayes, Travis Townsend and Danny Joesbury all going close. Using the wind to their advantage Ollie Coldman bombarded the visitors defence with high kicks and most of the play was in their 22. From a penalty scrum Joesbury broke away and made a good run down the right wing and was only held just short of the line. The ref had a busy afternoon and the Anselmians No 4 was the next to see yellow for a high tackle on Spud Green as he broke to the line.

The penalty kick by Dom Serridge from 30 metres soared over for a 3-0 lead. Some changes by coach Collins saw Brad Fox and Tommy Callaghan come on to boost the pack both were soon in action. A line out on half way to the visitors saw Callaghan carded for an infringement having been on for a whole 5 minutes. With both sides down to 14 again, the battle in the very wet centre field continued, scrum followed scrum, line outs were even with Chris Hodgkinson and Shaun Needham doing well in the air. Townsend was always a threat and with Brad Fox linking up Dale found themselves on the visitors 22 the referee again called a penalty for offside against them. Up stepped Serridge, took his time and slotted his second penalty 6-0. This prompted Anselmians to re-double their efforts and following a penalty on half way the kick found touch in the Dale 10 metre area, the ball was taken in by the visitors pack and the force their way over in corner. The conversion was missed so 6-5 with 10 minutes to go, Dale back on the attack

Coldman chipped through on the 22 but was cynically blocked and the ref had no hesitation in calling a penalty but surprisingly no card. Captain Serridge cleaned the mud off his boots and hit a perfect kick from 22 metres to make it 9-5. It was becoming difficult to tell one side from the other as the players were soaked in mud! Dale had a penalty on half way trouble at the line out caused the ref to give the visitors 2nd row a red card followed by one for Foster who had come on as sub. Dale were given the scrum and continued to battle in the Anselmians 22 as the final whistle came, they had battled the league leaders to a standstill and fully deserved their win. The players, coach and supporters were on the pitch as if they had won a cup final, it may not change the overall league places but as the first side to beat Anselmians this season Dale had the bragging rights for the day.

Next week Dale make the long journey to St. Benedicts in Cumbria the bus leaves at 09.00 from the clubhouse.