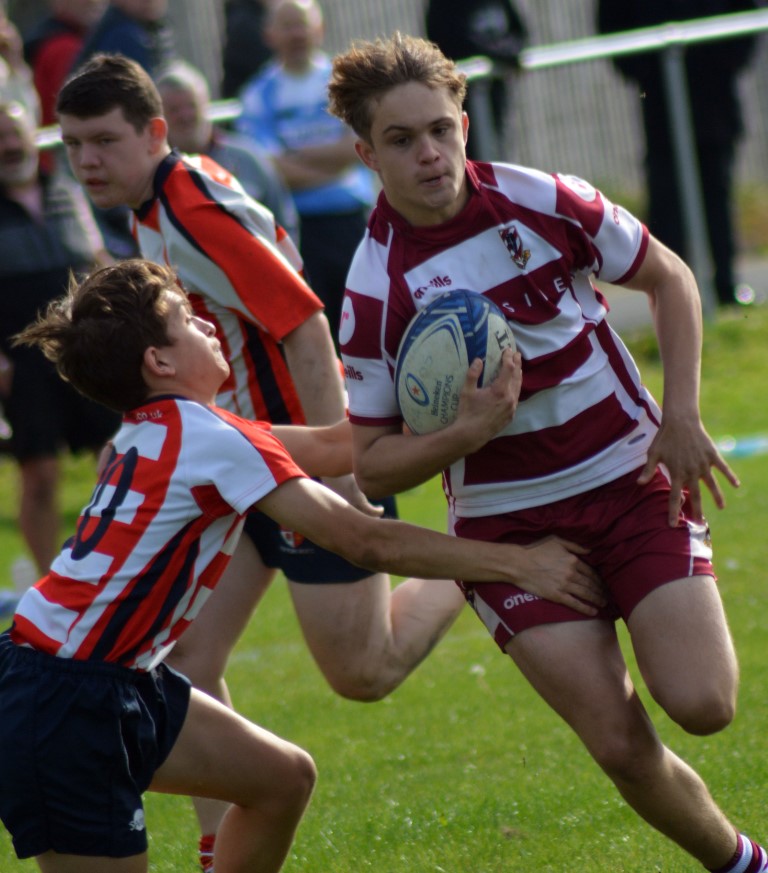 Rochdale had progressed to the quarter final stage of the Lancashire Cup where they had been drawn against tournament favourites Warrington. Warrington are in the top half of Division 1 with Rochdale at the top of Division 3. Unfortunately, Warrington arrived with only 12 men and refused to accept players from the home team to allow a full 15-aside match. The upshot of this was a 12 aside game and Rochdale having to bench 9 players. This tarred the game slightly but provided Rochdale with all the motivation they needed for this tough encounter, playing 12 a side on the wide main pitch at Moorgate Avenue.

After some initial pressure from Warrington a pass went astray and was gathered by Tom Hesketh, the Rochdale left wing; in the blink of an eye, he stepped inside, fended a would-be-tackler and accelerated into open field. Try as they might the defence couldn’t catch him and he crossed for a score under the posts (7-0). This steadied any nerves the Rochdale team might have had and they soon doubled the advantage. From a turnover in the Warrington 22, Mitch Holt broke blind and, with his fullback Ollie Simpson racing up out wide, pulled the ball back to Tom Drennan who sailed through the gap and was strong enough to carry two defenders over the line to register a score out wide(12-0).

Rochdale were in the middle of a purple patch and everything was going their way. Next Zac Baker, exploiting the vast amount of space, cut back from a blind-side break to find a gap in the midfield, which he raced through to score under the posts (19-0). It is a credit to Warrington that they managed to fight their way back into a game that was slipping away. Just when it looked like Rochdale would hold out until half time, a clever cross-field kick was gathered by the Warrington left winger who scored in the corner (19-5).

With Rochdale forced into multiple substitutions to comply with the ‘Half-Game’ rule, their play was becoming a bit disjointed. The next score would be crucial and, after a lineout steal from Ben Hankinson, the ball found its way to Olly Mills who shrugged off several would-be-tacklers and powered over (24-5). With the clock running down, Rochdale were awarded a kick in front of the Warrington post but ignored the easy three points. Holt, with a pin-point cross-field kick, found Will Simmons on the wing who cantered in unopposed (29-5). However, Warrington were not done yet and secured another score, from the final play, after a strong run through the middle, with the left winger on hand again to finish in the corner. Final score 29-10.

Some good all-round performances from players playing out of position. Declan O’Loughlin, Jacob Jackson, Alex Barry, Mills, Ben Sunderland, Joel Rigby and Drennan all worked hard covering the open spaces. Simmons, Tom Shaw, Holt, Will Rawlinson, Nick Wright, Ben Kershaw and Gabe Fraser lead the defensive line. MOTM went to Zak Baker for coordinating everything from behind the scrum, not least for dealing with ball from the scrum with no back row, but also sniping runs and accurate passing to bring other players into the game.

Rochdale wait to hear who they will meet for their Lancashire Cup semi-final encounter.