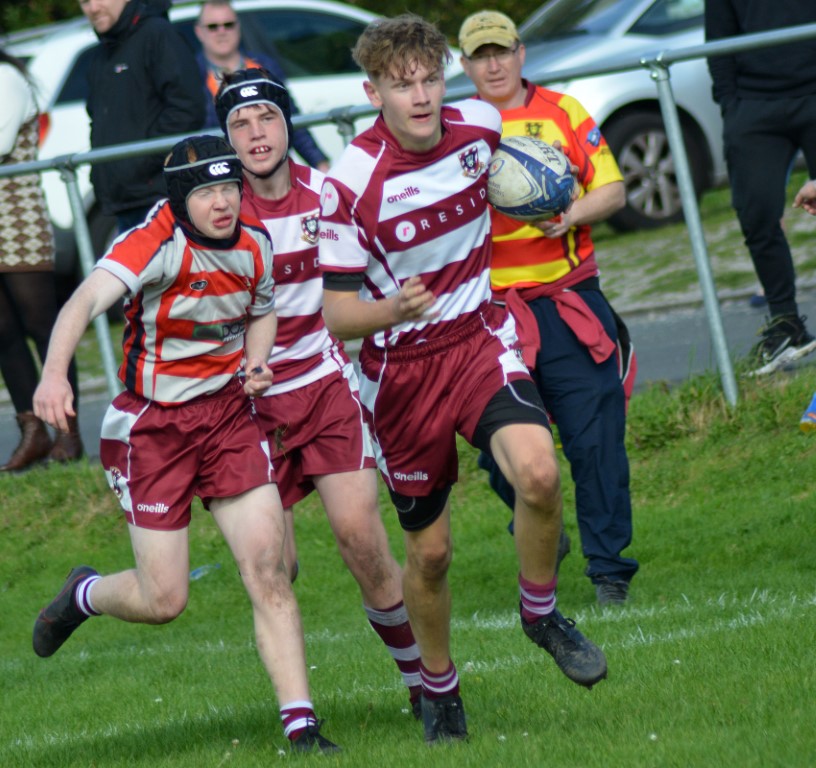 With an official rest weekend for League fixtures Rochdale had the opportunity to entertain Sefton, a team one league higher, in a friendly fixture. Matches have always been close between the two teams so Rochdale were expecting a similar game to the previous week. Sefton rely on a very physical and formidable pack of forwards and, straight from the kick off, Sefton used their big carrying forwards to get on the front foot before moving the ball wide. Rochdale were defensively up to the task and several dominant tackles reversed Sefton’s momentum. From an attacking scrum just inside the Rochdale half, deputy scrum half Ben Sunderland broke and stepped a couple of players before putting Will Simmons into space. Simmons stepped a couple more players before speeding away down the wing to register the first score under the post (7-0).

Rochdale were soon back on the attack and after more good lineout work from Ben Hankinson and some strong carries from Jacob Jackson, Garret Myers and Declan O’Loughlin. Olly Mills powered over from close range (12 – 0). There was a flow to the Rochdale play now and the pace of the game was causing Sefton problems. After some more good handling Rochdale formed a ruck just short of the Sefton line and with dummy runners fixing the defence, Hankinson put Mills through a gap to register the score (17-0).

Rochdale looked to be in full control but it’s a credit to the opposition that they were able to find a way back into the game. Sefton went back to their strengths, using the forwards to stretch the Rochdale defence and in the process accrued several penalties. These penalties resulted in Rochdale losing a man to the bin and, with the numerical advantage, Sefton scored their first try with Rochdale running out of defenders out wide (17-7). The score boosted Sefton’s belief and the game really opened up with some end-to-end play. Rochdale almost added to their lead after some excellent play but the ball was spilled meters short of the line; the Sefton prop was first to react, scooping up the ball and accelerating away. He found the support runner on the halfway who then beat the cover to score under the post (17-14), concluding the score for the first half. Rochdale were left wondering how, after dominating much of the game, they were only narrowly ahead.

The half time talk was about getting back to basics, controlling possession and dominating territory. This was taken onboard and within ten minutes Rochdale had registered two more scores. Firstly, Mills added to his tally with another close range try (22-14). Then a forward collective score, with a catch and drive from ten meters out and O’Laughlin touching down (29-14). Sefton continued to play through their forwards with some good pick and go phases but were unable to breach the Rochdale defence. After an excellent clearance kick from Sunderland the Sefton fullback couldn’t stop himself carrying the ball into touch.

After chasing his kick, the scrum half then took a quick throw catching everyone by surprise and allowing Charlie Bleakley an easy 20-meter jog to the line (36-14). Try as they might Sefton couldn’t sustain any pressure in the Rochdale 22 and the home side were able to relieve the pressure with some good clearance kicks from Nick Wright and Mitch Holt. Rochdale’s next score came straight off first phase. From a lineout the ball went straight off the top to the scrum half who dummied through before off-loading to Mills who straightened through the gap and went right under the post (43-14). Sefton resorted to kicking for position which gave the Rochdale back-three, a combination of Tom Shaw, Ben Kershaw, Gabe Fraser and Max Cooper, lots of opportunities to run the ball back which they were more than happy to do. The final try was an individual effort from Sunderland who, after a promising Sefton attack in the Rochdale 22, stripped the ball and broke down the blind side for a length of the field score (50-14).

An excellent overall team display both in attack and defence. Good performances from Paddy Kershaw, James O’Connell, Joel Rigby and Alex Barry. MOTM went to Tom Drennan for another great performance, bringing his back row skills to his new position of hooker, covering lots of ground making runs, tackles and turning ball over at the breakdowns.