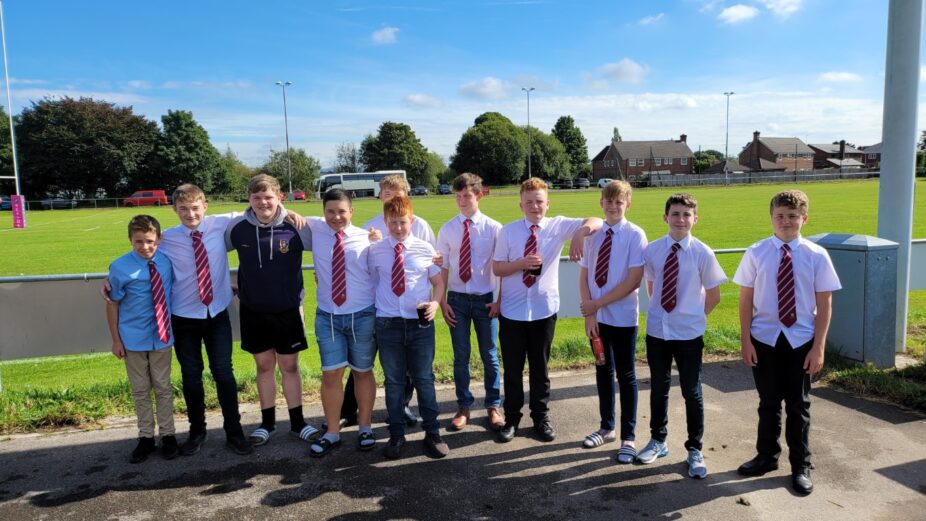 Playing on the B Pitch in ideal rugby weather, and with Gary Smith taking time off senior team rugby to kindly referee for us, we set up as 2x 12 a side teams dropping the number 8. Two 25 minute halves were to be played with Rochdale opting to receive the ball first.

With Fred named as captain, play commenced and our style of play was immediately apparent – strong forwards play coupled with some lovely passing down the line saw a good catch and spin down the line and Oli Husband registered the first points on the board 5-0. Whilst it was only for fun, Adam slotted the conversion from a very difficult distance and angle to admiring applause.

From the restart a similar theme developed .. the forwards got a push on and won a scrum against the head, Sam Bowers firing the ball down the line. Great recycling stretched the Bury line across the pitch and some lovely interplay through Max Rawly opened up some gaps. Cameron spotted the opening and delivered a powerful run to split their defence and charge through the middle to touch down, 10-0. Adam added the extras from a more straightforward position in front of the posts.

A restart and the Bury pack were again swiftly shut down, the forwards driving in and the Max Evans, Drew and Jethro combination counter-rucked to turn the ball over with Bowers getting in and releasing the ball again. A pass back inside saw Logan plough through the opposition, then superbly release to Charlie who flew round the edge of their line .. it took a massive effort for Bury to manage to bundle him into touch.

An unfortunate spill gave possession back to Bury, but from the resulting scrum some excellent sniping work from Bowers tackling his opposing number left Bury nowhere to go .. their line was flat and the speed of our three quarters meant they regularly found themselves without space. The Bury players managed to go on a jinking run through our players only for a crunching stop by Fred, turned the ball over again and a swift shift down the line would have added to the points save for an unfortunate knock on with the final pass. Undeterred, from the scrum the Bury players found themselves trapped again and immense work from Jethro and Max counter rucked the ball back. Ground was made but a handling error saw the half draw to a close.

The second half saw Bailey switch with Jonty to play for Bury and keep a 12 a side after they picked up an injury. From the kick off Charlie gathered the ball and simply ran through to add one of the more straightforward tries he will have to his roster. 15-0. Bury didnt make that mistake a 2nd time and a period of play ensued in the middle of the pitch .. Bury found themselves running left and right but without many metres gained forward. Fred and Jethro were making a habit of ripping the ball from the ruck and breakdowns, and the backs kept Bury stretched. Logan delivered a lovely chip as the ball came out with Cameron chasing it down and giving Bury no chance to regroup and run back at us.

From the resulting scrum, the forwards won the ball back and Oli Husband was given a great ball from Max R to turn on the burners and fly round the side and over the line to make it 20-0. Play continued to be hotly contested but our smothering play continued to frustrate .. Bowers gathered the ball superbly from our scrum which was being driven backwards and from the resulting open play Jethro took the ball and slammed into their pack with a lovely driving maul taking us around10 yards from their try line before being pinged for a knock-on. Bury attempted to spin but with nowhere to go tried a chip over the top. Adam snapped up the loose ball and scythed a run through the middle to cross the line for a great score 25-0.

Despite the look of the scoreboard, Bury had been playing really well all morning and were finally rewarded for their efforts by finally breaking through our line to post a score of their own 25-5. Just before the end Jethro staged another barnstorming run down the pitch before offloading to Charlie in support and it was a superb last gasp Bury tackle that prevented Charlie from adding another to our tally.

A really good team effort with the strong forward platform delivered by Drew, Jethro, Max E, Logan and Jonty & Bailey. Great communication and line depth allowed Fred, Charlie, Max R, Cameron, Oli H and Adam to dictate the majority of the game, with a man of the match performance by Sam Bowers stitching it all together. The opposition picked Charlie Beavan as their man of the match as just reward for his efforts. Great day, great performance. Smiles all round.

A Mixed Bag at Aireborough

The rain was clearing as we arrived in North Leeds for what look like a good day of running rugby. There was a slightly delayed start with some of the Rochdale squad still in transit. Aireborough kindly lent us a player to enable play to get underway with two equal sides for the first of four 15 minute quarters.

Unfortunately, in the face of some abrasive running and quality rucking from Aireborough, Rochdale froze somewhat. Aireborough were able to crash through Rochdale’s line with relative ease and regularity throughout the first quarter.

In the second quarter (after some strong words from their coaches!) Rochdale regrouped and began to push Aireborough back with some renewed tackling and better counter rucking. This eventually led to the backs putting the ball through the hands for a very nice try wide on the right.

However, this proved to be something of a false dawn with Rochdale’s third quarter proving to be their worst of the match. A combination of heads dropping and some petulant back chat to the referee saw Rochdale lose their focus and concede a number of tries in this quarter.

During the final drinks break the Rochdale players discussed how they could improve. The boys agreed to play closer to the ruck to combat Aireborough’s impressive blitz defence. The final 15-minute period therefore saw some redemption. Rochdale were now putting in some strong runs of their own with much improved tackling and aggressive rucking meaning they finished the game on an upward curve. Whilst the result was never in question pride was, at least, restored.

Honourable mentions must go to Aireborough’s pick for man of the match: Isaac for his never say die attitude. Rochdale’s man of the match award went to Will for some superb last-ditch defence.

Areas for the team to work on this week at training will be aggression and decision-making at the ruck plus their defensive alignment.