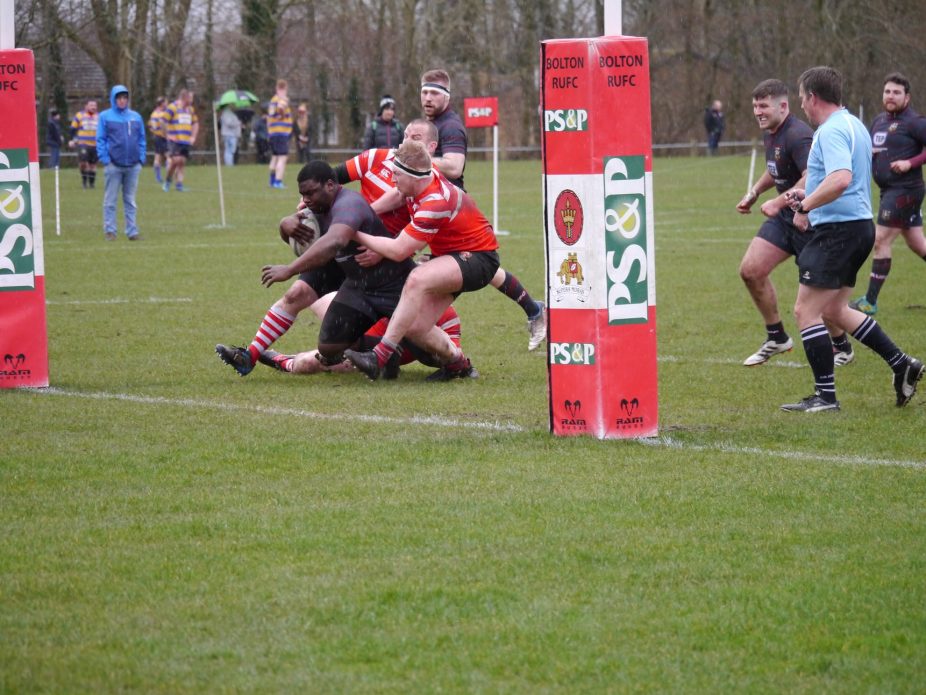 Despite being without Sean Needham , Ross Hartley and Ollie Coldman  and with Travis Townsend en route back from Portugal Dale fielded a strong side with Danny Joesbury at scrum half and Eddie Shanks in the second row,  the team had a nice balance with old heads Tom Callaghan and Tom Hindle leading the pack.

The pitch was is surprisingly good nick considering the recent rain which returned as the game kicked off, Dale were soon on the attack and after a high clearance kick by Nick Ahearn they were pressing the Bolton 5 metre area Josh Boardman pounced on a lose pass and slid the ball inside to Mike Cross and the wing forward made no mistake Ahearn pulled the conversion wide so 5-0 to Dale with only minutes on the clock. Bolton were stunned into an early response and after a good break in the midfield only two great tackles by first Cross and after a scrum by Ahearn the home side managed to cross the Dale line for a converted try 7-5 after 10 minutes.

The action continued with Dale pressing once again this time Beltus Nonleh playing at lose forward crashed into the Bolton defence supported by Tom Hindle he found the try line 7-10.

Next came arguably Dale’s best try with Nonleh sucking in the Bolton defence and fine scissors move saw Spud Green pass to Josh Boardman and back again to totally bamboozle the home defence Boardman touched down Ahearn made no mistake with the conversion 7-17. Dale had their tails up and with good line out work from Chris Hodgkinson and Eddie Shanks quick ball was always there and despite the driving rain Dale managed another try as half time loomed this time a James Duffy chip through was followed up by Ahearn who scored a good ty but could not convert 22-7.

Dom Macklin made a great interception,  the break was held on the right wing but a series of off sides was punished by the referee and Ahearn  stepped up to slot over a fine penalty into the swirling wind 7-25. The game looked over but as half time was almost upon us Bolton broke through their scrum half Will Bate and a move wide on the left outnumbered the Dale defence for a try which was converted on the stroke of half time 14-25.

Half time saw the inclusion of Travis Townsend who had rushed straight from the airport to play he replaced the unlucky Danny Joesbury who had had a faultless first half at scrum half and set the team on a winning track.

Travis was soon the action creating chances from the base of the scrum and as Dale inched nearer up popped hooker Jonny Bradley to score a rare try 14-30. This prompted Bolton to redouble their efforts and after a long looping pass by Pritchard , Dale again found themselves outnumbered on the right side and the Bolton winger scored in the corner 21-30.

Minutes later the Bolton fly half completed another copy  cat try when a high and slightly forward looking pass took out two Dale defenders and saw the winger again finish off in the corner. 26-30. Things were looked serious now and when Dale Gave away a silly penalty 35 metres out Bate elected to kick, the ball soared high through the posts 29-30 .

The game was now on with both sides battling the conditions and a pitch that was cutting up badly Bolton pressed hard but Dale defended well with Hill and Foster on in the pack and Townsend trying all his trickery to release Nonleh on his pounding runs it was Dale that had the final laugh with a  try in the final minute that Ahearn converted to make the final score 37-29 to the visitors. A pulsating game of rugby in awful conditions saw Dale get maximum points but led a good lead slip for the second week, and remain in third place in the league. Next week De La Salle at home 3pm kick off always a lively encounter! Finally a mention for Dale’s 3rd team who secured promotion with another win Well done !