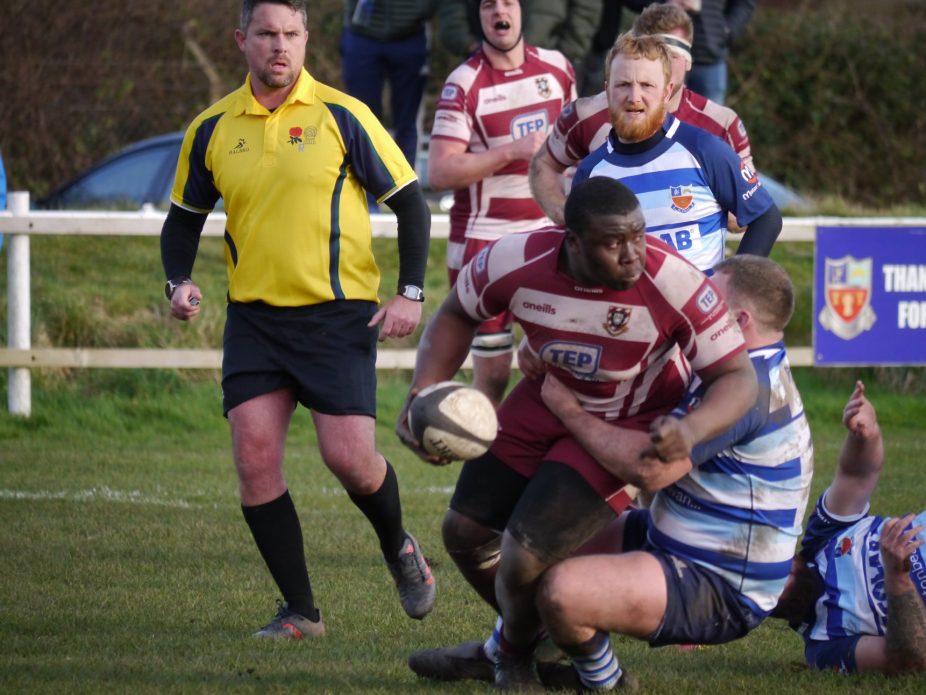 After four minutes play Dom Serridge made the break and continued in good support play as he scored the opening try for ‘Dale and supporters hopes of beating our “bogie” team were raised. But for a strong breeze Nick Ahearn would have had a better day with the boot; as it was, he did hit the upright twice, once with the ball bouncing in but on this occasion it didn’t get near.

The wind did have an affect on the match but not so much as sloppy handling from both sides. Rochdale had good possession but gave it away too often by not looking after the ball.

The home side were not going to lay down though and gained their first attack after 12 mins and were awarded a penalty for the ball being played on the ground. In front of the posts the kicker had no problems. 3-5. Two minutes later Ahearn slotted a similar penalty to increase the lead, but on the next ‘Park attack Rochdale’s defence buckled and they scored a try out wide, the conversion was missed so after 20 minutes the scores were level. 8-8.  Rochdale had some good moments and James Duffy together with Serridge and Ahearn provided good ball to Beltus Nonleh who never failed to make plenty of yards.

It was the home side however to make the next score, a kick forward was chased and Rochdale’s defence failed to keep the ball, the ensuing ruck gave ‘Park the opportunity to move the ball out wide again and their second try was grounded. Conversion missed again in the wind, this was to be the only time the home side were to lead on the day. 13-8.

The ‘Dale forwards were having the better of the set piece exchanges but collecting lineout ball was being a problem.  Dom Serridge was replaced on 31 minutes with an injury and Danny Joesbury came on to replace. Joesbury had a hand in the next Rochdale attack and he fed Ahearn who kicked forward to touch. From the lineout Winnington Park were penalised and the scrummage was well driven over for Nonleh to get his first try. 13-13 at half time.

Rochdale now had the wind in their favour, a strong ‘Dale attack led to a fracas and Tom Hindle harshly received a yellow card, and only five minutes after that the ‘Park eight was also awarded a yellow card just to level things up.

Nonleh and Dale Slamon continued to carry the ball well and caused many problems for the home side, Nonleh crashing through several defenders to get his second try. 13-18. From then on there looked only one winner. Rochdale probed and prodded but a long clearance kick from Ahearn provided the next opportunity.  The kick was collected and sustained pressure from ‘Dale allowed Josh Boardman to make an excellent run and score near the posts for a bonus point try.  This time Ahearn had no problems adding the extras. 13-25.

The away support (thin as it was) watched the ubiquitous Ross Hartley get involved in his trademark rucking activity which the referee took offence to and awarded him a yellow card. With only 8 minutes remaining that was his day done.

The ever trying Blair Henry had the last say on the try scoring, himself going over the whitewash out wide. Again the wind took it’s toll with the conversion attempt.

So, the “bogie” team were slain, but not for the want of effort, their vociferous home support gave plenty of encouragement and their team did not tire in the effort given. Final Score 13-30.