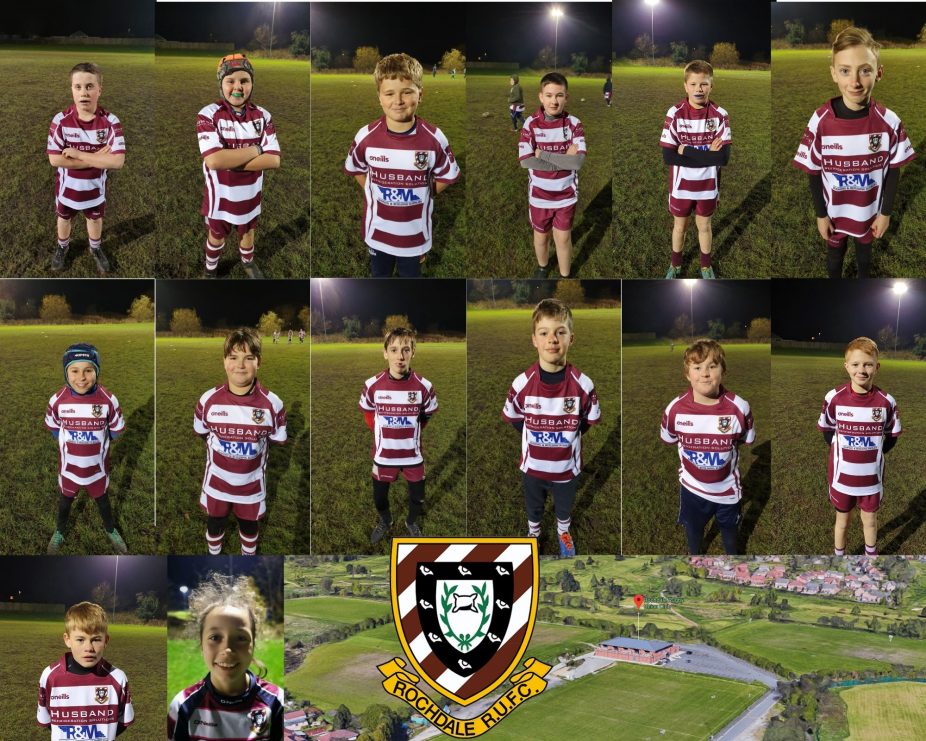 Solid Against Sedgley,  Awesome Against Aldwinians

A tri-fixture at Moorgate this morning, as part of the Lancashire waterfall competition.  A muddy pitch and treacherous ball conditions meant Rochdale would need to deploy a more pragmatic style to be successful. Our first match was against Sedgley Park a team with a big pack who had soundly beaten Rochdale earlier this season.

However from the off it was clear Rochdale were up for it and in no mood to give ground. Sedgley were greeted by a solid wall defence from the kick, marshalled admirably by  Noah. This relentless defence was forcing Sedgley to make mistakes which meant Rochdale’s power forwards, led manfully by Isaac and Drew, could crash the ball up and Jethro was soon on the scoresheet. The rest of the first half continued in the same vein, with Finn and Harry N disrupting Sedgley possession and Oliver shipping the ball out quickly to our first up runners.

Despite the conditions the back line was combining well, Fred, Jake and Izzy all showing their ability to get the ball through the hands and make serious ground. On the left-wing Louie was frightening his opposite number with his electric pace and jinking runs. On the rare occasions Sedgley did manage to break the line Will, playing his first game at full-back, was able to mop up the ball, or the man, or both!

Half-time saw changes to the Rochdale team with Hari G and Michael on in the forwards, and Sam B and James coming in to freshen up the backs.  If anything, the second half was even better with the relentless pressure from Rochdale really beginning to tell.  Sam B was delivering quality ball to the backs who seemed to be carving Sedgley Park open at will. Hari G and Michael were soon into the fray too with some big carries and tackles and James, showing some intelligent support play, was a constant threat on the wing.

As the half wore on Rochdales blanket defence, ferocious tackling and strong counter-rucking was beginning to frustrate Sedgley and tempers began to fray. This lead to an unpleasant bout of “handbags at ten paces” between the two packs, but the game eventually ended in good spirits with a 4-0 win to Rochdale.

The second game of the morning was against Aldwinians, another team who had beat us at the end of season festival last year, and ran us close 6-5 earlier in the season.  However, the home team were clearly looking to put this right straight from the kick off.  Intelligent play coupled with excellent handling and offloading meant Rochdale were scoring at regular intervals.  They were also able to (almost) nullify Aldwinians two, big, ball-carrying threats, leading to another shutout to the Rochdale defence.

Areas to work on this week will be: better communication of our pre-planned attack plays and remembering not to goad our opposition when we do score!