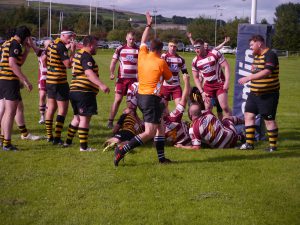 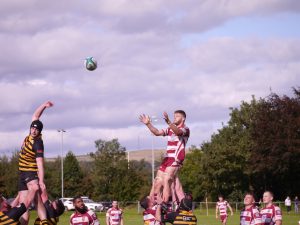 Coach Danny Collins still had 5 or 6 first teamers missing for this first league game of the season , but with new players Lewis Gambles [Hooker] and Nick Ahearn [Full Back] and with Josh Boardman moving up to the first  XV. he had plenty of talent to choose from. Leigh brought a big experienced pack and are always a handful at home or away.

A good crowd on a sunny afternoon at Moorgate Avenue saw Dale take the game to the visitors  from the outset with Josh Boardman breaking  down the right wing and jinking through a sleepy Leigh defense his final pass let in Rob Wadsworth to score in the corner, the conversion went just wide so 5-0. Leigh were soon back in the game and were awarded a penalty for offside in front of the Dale posts the kicker managed to strike the upright full on the ball bouncing back almost to the 22.

A great tackle by Dom Macklin on halfway stopped the visitors  next attack and led to a Dale penalty for not releasing, from the line-out Dale were awarded a scrum and another good charge down the wing ended with a chip through by James Duffy just being collected by the full back. Leigh looked dangerous going forward using their big pack to batter the home defence , they were awarded a penalty on half way and elected to kick for goal this was a much harder position than the earlier effort but was taken well by the fly half 5-3 with 17 minutes gone. Dale were next on the score sheet when Coldman converted a penalty right in front of the visitors posts to make it 8-3. 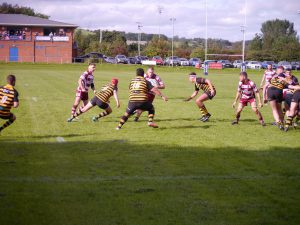 Dale now had their tails up and only a dropped pass on the wing stopped a fine passing move yielding another try. Moments later the with home side pressurizing the Leigh 22 and another penalty from the line out Gui De Sousa appeared to have crossed the line but the referee ruled held up and gave Dale a 5 metre scrum this time Tom Callaghan made no mistake crashing over in the corner the conversion again fell short 13-3 on 38 minutes.

A good break by Dom Serridge saw Coldman receive a lovely inside pass that only a seemingly high tackle stopped, the referee gave play on and the loose ball was collected by Leigh and taken to halfway. The last chance of the half went to newcomer Nick Ahearn racing in from full back only to be stopped just short of the line. Half Time 13-3.

Ben Coulter replaced Tom Callaghan in the front row and Harry Hayes and Jake Green came on in the backs, Leigh had obviously had the hard word at half time and came out all guns firing in the second half , Dale defended well and Leigh squandered a couple of chances through poor handling.

Dale back on the attack with winger Blair Henry tackled just short of the visitors line but in the next passage of play the backs make no mistake with Harry Hayes going over Coldman converted 20-3 .

Moments later a bizarre move when a huge hack through from half way saw Blair Henry in a foot race with the Leigh full back who appeared to pull him back under the posts the referee gave Dale a 5 metre scrum and Coldman peeled off the back to score a nice try and Converted to make it 27-3. Dale kept up the pressure and a good attempt from Andy Donoghue at the base of the scrum was only just short.

Leigh had a man yellow carded for repeated offside but continued attacking and loose pass from Dale was intercepted on half way and despite appeals for a forward pass the Leigh centre scored under the posts, somehow the conversion is missed and the final score is 27-8 to Dale.

Coach Danny Collins said afterwards he was satisfied with the performance but with better finishing the win could have been more emphatic, however a 5 point win is a great start, next week Dale are at home again to Manchester in a 3pm kick off.